A bakery owner in Medford, New Jersey was ordered to remove her shop's moose mascot from an outdoor mural due to sign violations. The bright pink wall adorned with sprinkles and the shop's moose mascot is considered a sign, not artwork, according to the township officials.

MEDFORD, N.J. - A dispute over a beloved mural on the exterior wall of a New Jersey sweets shop has the community rallying around a small business owner.

Candy Thibeau, owner of Maggie Moose Bakery in Medford, said she received a letter from the township on Monday that claimed the mural violates local sign codes due to its artwork.

The bright pink wall adorned with sprinkles and the shop's moose mascot is considered a sign, not artwork, according to the township officials.

Thibeau was given two choices to rectify the mural in order to bring it up to the township's standards, including one option that involves painting over the moose mascot.

Thibeau could hire a lawyer and spend money on legal fees for the possibility of a variance, but she believes everyone's time and energy is best spent on something more meaningful than a playful drawing of a cartoon moose.

"It just seems so silly," Thibeau said. "I would rather pay the $1,500 and just be done with it - let me not hire a lawyer, let me not waste the board's time over something so petty." 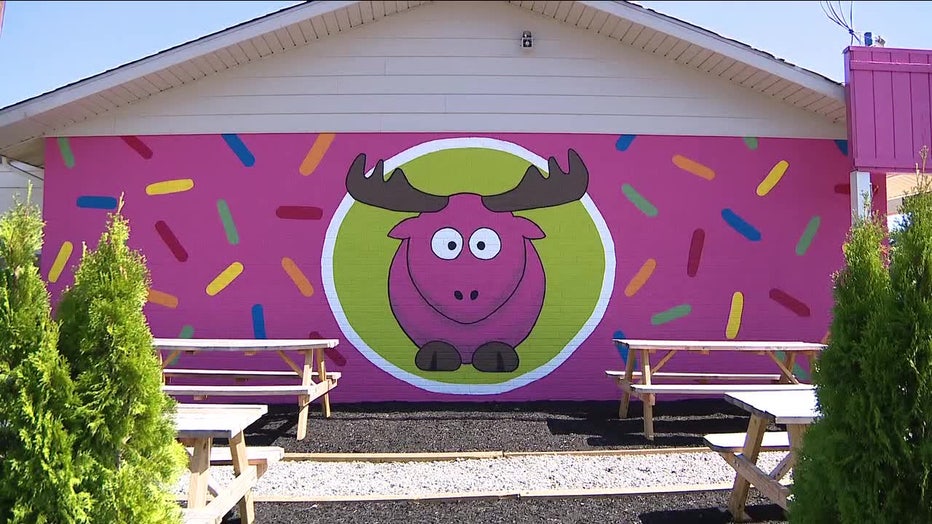 When reached for comment, Medford Inspector Ann Bell provided links to the township's standing laws and not much else. Meanwhile, in a Facebook post, Thibeau called Medford's enforcement "absurd and ridiculous."

Thibeau said she will begrudgingly comply with the township's decision, but locals who were at the shop on Tuesday hoped the mural would remain as-is.

"This is the best, and it should not be destroyed," Kathleen Giampietro said before posing with friends for a picture in front of the Medford staple.