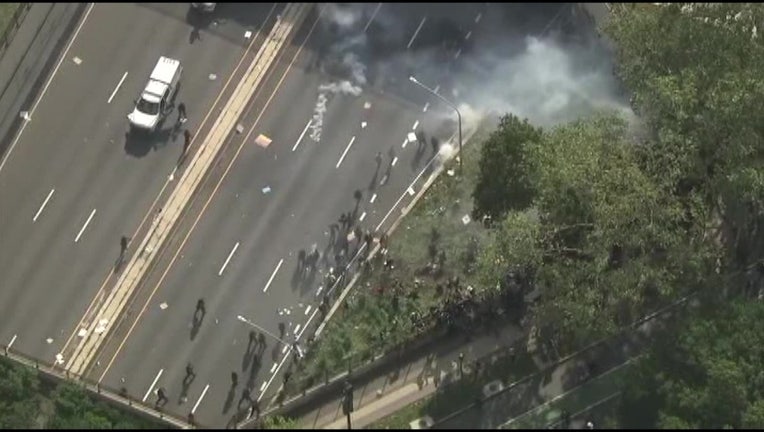 PHILADELPHIA - Former SWAT officer Richard Nicoletti who was seen on video pepper spraying protesters on I-676 during the unrest following George Floyd’s death is awaiting trial after a judge allowed criminal charges to proceed.

Charges include one count of possession of an instrument of crime, three counts each of simple assault, recklessly endangering another person and official oppression.

A video of him dressed in riot gear approaching three protesters kneeling on Interstate 676 on June 1, 2020, pulling down at least one protester's mask or goggles, then pepper-spraying them, was circulated widely on social media and was included in several news stories about the national police response to demonstrations.

"I am grateful today that a Common Pleas judge watched the same video millions of us watched last summer and agreed that this matter should be pursued and resolved in a court of law," DA Larry Krasner said in a statement.

In May 2021, a Philadelphia judge dismissed all charges saying Nicoletti had been authorized by his commanders to clear the highway during protests and had been given pepper spray as a tool to do so. District Attorney Larry Krasner vowed to "vigorously pursue charges" in the case.

"Once again, it must be re-election time for DA Larry Krasner as he continues to issue press releases on filing criminal charges against Philadelphia police officers.  Krasner refuses to hold dozens of unlawful protesters accountable, those who set fire and looted our great city. This double-standard of justice is unacceptable.  We will continue to provide an appropriate defense for officer Nicoletti as this case moves forward," FOP Lodge #5 President John McNesby said.
___