A Philadelphia judge has dismissed charges against a former police officer accused of pepper spraying protesters on I-676 during demonstrations last summer.

PHILADELPHIA - A Philadelphia judge dismissed all charges against former SWAT officer Richard Nicoletti who was seen on video pepper spraying protesters on I-676 during the unrest following George Floyd’s death last summer.

Municipal Court Judge William Austin Meehan ruled Monday that Nicoletti had been authorized by his commanders to clear the highway during protests over the death of George Floyd and had been given pepper spray as a tool to do so, The Philadelphia Inquirer reported.

"You may not like their methods, that doesn't criminalize their method," Meehan said. When the prosecutor cited Nicoletti's termination for violating department protocols, the judge said officials couldn't put officers "in charge of maintaining order, and then tie their hands on how they're going to do it."

"The people want and deserve justice and change, including police accountability, even though some institutional players are in denial. We will stay the course," Krasner said in a statement on the eve of a closely watched primary in his re-election bid.

Nicoletti had faced charges including simple assault, recklessly endangering another person and official oppression in the case. A video of him dressed in riot gear approaching three protesters kneeling on Interstate 676 on June 1, 2020, pulling down at least one protester's mask or goggles, then pepper-spraying them, was circulated widely on social media and was included in several news stories about the national police response to demonstrations. 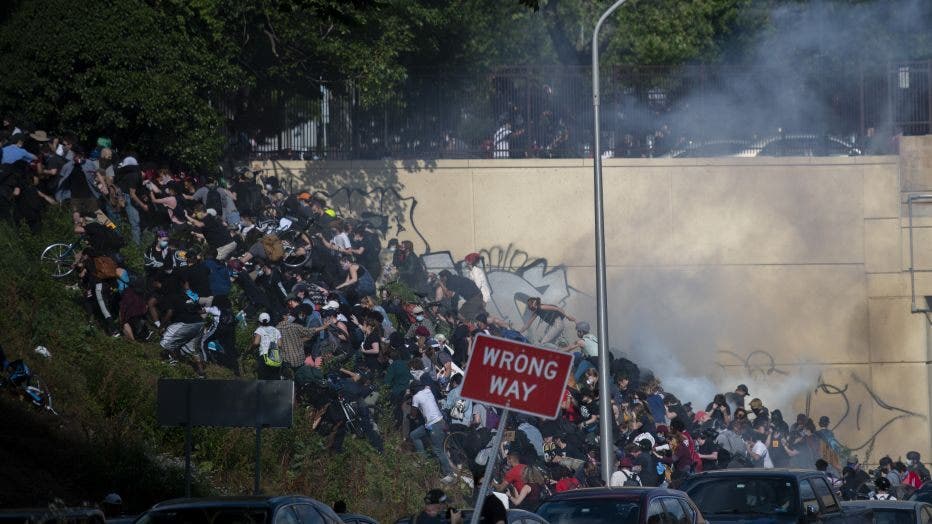 In January, a judge dismissed charges against another officer charged over his actions during the protests, ruling that prosecutors had failed to provide evidence that Staff Inspector Joseph Bologna's use of a baton constituted a crime. Krasner re-filed charges the following month and the case is pending.

The dismissal of the charges against Nicoletti came after a preliminary hearing featuring testimony from three people doused with the spray. After the ruling, defense attorney Fortunato Perri Jr. called it "another example of the district attorney's office charging a police officer with a crime that is not supported by the facts or the law."

After the city and state police use of tear gas against demonstrators who had made their way onto the expressway gained national attention, Mayor Jim Kenney and Commissioner Danielle Outlaw apologized, calling the use of force that day "unjustifiable."

Fraternal Order of Police President John McNesby had no comment on the case Monday.

Nicoletti will have the right to contest his dismissal per the current collective bargaining agreement, according to Outlaw.