FOX 29's Steve Keeley has more on a report from city officials on unrest in Philadelphia.

PHILADELPHIA - The Philadelphia Office of the City Controller has released a report on its independent investigation into the city's response to civil unrest following the death of George Floyd.

Officials focused their investigation on the events that occurred in late May and June 2020, finding that the city had received information about civil unrest occurring nationally as early as May 26th -- days prior to the first major protest in Philadelphia.

The investigation, which included the review of more than 1,700 documents, such as intelligence reports, after-action reports, and many key documents from the Philadelphia Police Department, found that Philadelphia officials failed to sufficiently plan for the unrest.

As a result of the failure to plan for civil unrest, Philadelphia officials overcompensated on force and deployed tear gas, the report found. Other findings observed in the report included that the city leaders failed to utilize appropriate strategies and police resources to minimize violence and looting.

Overwhelmingly, the issues identified in the report pointed to a lack of leadership at the highest levels of key Philadelphia departments and agencies, officials said. The report noted that pursuant to the City’s Emergency Operations Plan, the ultimate responsibility for any city response lies with Mayor Jim Kenney.

‘I will not resign’: Commissioner Outlaw responds to City Controller’s report on response to civil unrest

Commissioner Outlaw delivered her response to the City Controller's report on the city's response to civil unrest last spring. She added that she will not resign and has not been asked to resign by Mayor Kenney.

"As many Philadelphians expressed their First Amendment rights and justified anger in the days following George Floyd’s murder, our government failed us," said City Controller Rebecca Rhynhart. "While top City officials stated that there was no way to plan for what happened, that’s just not true. A blueprint for maintaining peace during large events and protests did exist and if it had been followed, many of these failures could have been avoided."

The investigation also included interviews with 27 city officials and employees, including the former and current Managing Directors, Police Commissioner Danielle Outlaw, representatives from the University of Pennsylvania and Drexel University Police Departments, and 22 civilians. 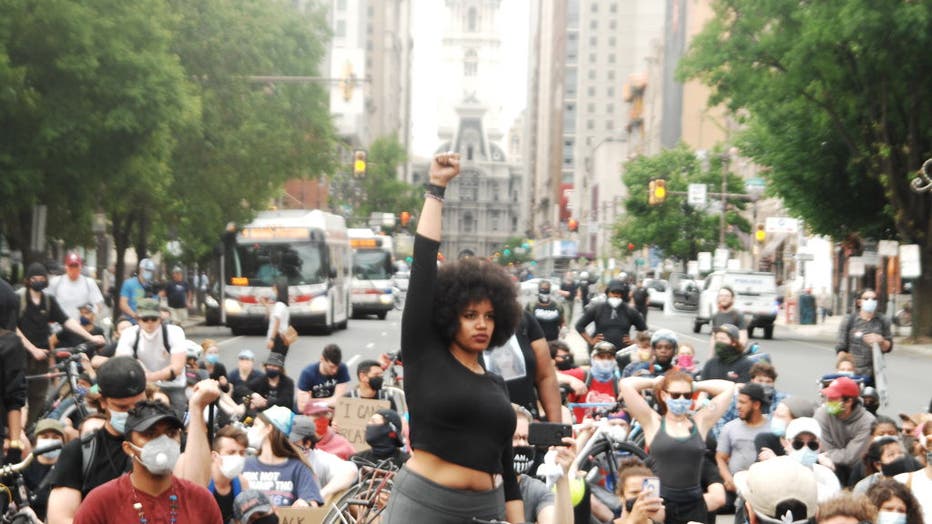 Thousands of protesters fill the streets of Center City Philadelphia for the fourth straight day of demonstrations to demand justice for George Floyd and other victims of systemic police violence in Philadelphia, PA, on June 2, 2020. (Photo by Cory C

"This lack of preparation had cascading negative consequences. From inadequate staffing levels that led to increased and excessive force, to looting throughout the city continuing without challenge for hours at a time, this type of failure – of planning and leadership – cannot happen again."

Key findings from the investigation include:

As a result of its failure to plan appropriately, on May 30th, the first day of full protests, the city did not have the manpower or transportation necessary to address widespread looting and vandalism in Center City.

Addressing the findings in the report, officials recommend that the Office of Emergency Management return to being a stand-alone agency with an independent director. Also, the Philadelphia Police Department should ensure all key positions are filled -- most notably that of the Inspector of Homeland Security.

In response to the report, the city, which rejected some of the claims about leadership, released the following statement:

"We are fully committed to taking the recommendations put forth by the CNA report seriously. As a matter of fact, some of the suggestions in the analysis did not come as a surprise. Because we are an organization that strives for continual improvement, in the days and weeks following the Floyd demonstrations, we actively assessed our responses to the demonstrations and made necessary adjustments based on new intelligence gathered, as well as our experience during these demonstrations. This has remained an ongoing process so many of the recommendations in the CNA report are already actively being implemented."

"Multiple mass gatherings, protests that turned violent, and widespread looting were not only unprecedented here in Philadelphia, but in cities across the nation. Despite the report’s claims to the contrary, there was simply not a "blueprint" available for what our cities faced this past summer. While we appreciate and welcome a second independent review, the City Controller's report fails to mention that previous protests which took place within the city were not of the scale seen during the summer of 2020.

The report also fails to acknowledge the dozens of injuries sustained by PPD officers that bravely stood the line in front of non-peaceful protesters who threw acid, urine, bricks, bottles, and various other weapons and objects."

You can read the Philadelphia Police Department's full statement, here.

The investigation, which included the review of more than 1,700 documents, such as intelligence reports, after-action reports, and many key documents from the&nbsp;Philadelphia Police Department,&nbsp;found that Philadelphia officials failed to sufficiently plan for the unrest.&nbsp; FOX 29's Kelly Rule reports.

Officers, civilians hurt after a day of protests, riots, looting in Philadelphia