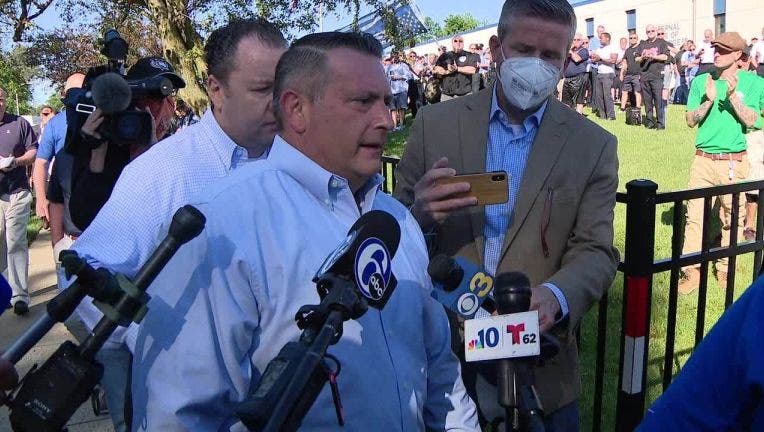 PHILADELPHIA - Philadelphia District Attorney Larry Krasner has refiled charges against a former city cop accused of striking a student protester with a metal baton during a protest last summer.

"Philadelphians demand evenhanded justice and we are trying our very best to give them exactly that. Our oath to seek justice requires nothing less," Krasner said in a statement Thursday night.

Bologna's attorney said a lack of evidence from witnesses lead to the charges being dismissed. According to attorneys Fortunato Perry and Brian McMonagle, Bologna has the option to be fully reinstated to his original position but remains unsure about returning to the force.

Video of the incident circulated around Twitter and sparked the ire of District Attorney Larry Krasner who charged Bologna with several offenses. Police Commissioner Danielle Outlaw said she was "deeply concerned" about reports of excessive use of force by police against peaceful protesters.

Outlaw suspended Bologna for 30 days with intent to dismiss. Bologna turned himself in to at the Fraternal Order of Police headquarters in July.

"This is not unexpected from a District Attorney, who craves media attention and is facing a primary challenge from inside his own party. DA Krasner is clearly running away from his failed record over the past three years and this latest decision to re-charge this officer is not based on facts or evidence. We will continue to support and defend Joe Bologna, a highly decorated and respected member of the Philadelphia police department,"  FOP Lodge #5 President John McNesby statement in a statement after the charges were refiled.