PHILADELPHIA - Across the United States, religious leaders are taking unprecedented steps to shield their congregations from the coronavirus - canceling services, banning large funerals and weddings, and waiving age-old requirements of their faiths.

For Roman Catholics, attendance at Mass is considered a sacred obligation. But bishops in numerous dioceses announced that they are canceling all public worship services for at least two weeks, in some cases indefinitely. Many other bishops - including all those in Pennsylvania and Ohio — said they were temporarily dispensing with the requirement that parishioners attend Mass.

Among congregations that are getting creative is St. Thomas African Episcopal Church. The Philadelphia church is allowing congregants to drive through their car port to receive a blessing and communion.

Father Shaw told FOX 29 that the church is asking anyone who is under self-quarantine or who does not feel well to stay home. Shaw sanitized his hands between each congregant during Sunday morning's modified service. Parishioners were also required to sanitize their hands before accepting the sacrament.

Comparably strong measures were taken by leaders of many other faiths, ranging from Orthodox Jewish rabbis in New Jersey to Episcopal and United Methodist bishops in North Carolina. From its headquarters in Salt Lake City, The Church of Jesus Christ of Latter-day Saints announced it is halting all worship services and church activities for its 16 million members worldwide.

Among the Catholic leaders issuing waivers on Mass attendance were Los Angeles Archbishop José Gómez, the president of the U.S. Conference of Catholic Bishops, and Bishop David Zubik of Pittsburgh, who also asked for changes in the locally popular tradition of parish fish fries during Lent. Zubik urged parishes to offer the fish only on a take-out basis, with no eat-in option. 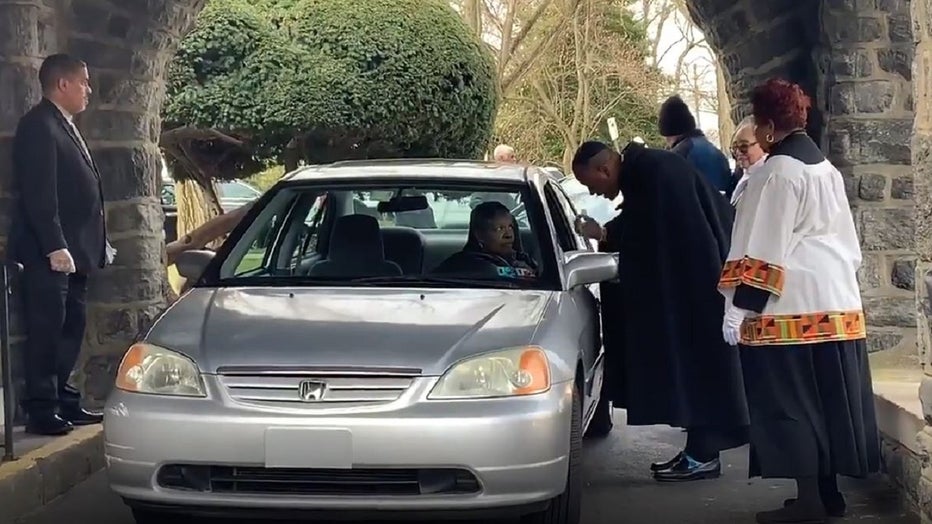 In the nation’s capital, Archbishop of Washington Wilton Gregory issuing a sweeping order indefinitely canceling public Masses and closing Catholic schools through March 27. He said weddings and funerals may proceed, but should be limited to immediate family.

Like many bishops, he invited parishioners to join in Masses and prayers that will be livestreamed on social media.

“A general dispensation is given from the Sunday and Holy Day obligation,” he announced. ”Catholics are asked to pray at home, with the rosary, biblical prayer, personal devotions and/or to devoutly watch televised Masses.”

The Archdiocese of San Antonio announced numerous cancellations and postponements, including the annual Catholic Night at the Spurs, now that the city’s lone major league sports team has been sidelined by the suspension of the NBA season.

In northern New Jersey, the Rabbinical Council of Bergen County, which represents more than two dozen Orthodox synagogues, ordered an indefinite shutdown of virtually every religious activity. It said rabbis and congregation members should worship separately, in their own homes, and organize no community gatherings of any sort. The council advised adults to work from home, and said they should not let their children engage in play dates. Attendance at funerals should be restricted to close family members, the council said, and kosher restaurants under its control should engage only in take-out or delivery service, rather than allowing on-premises dining.

“It is with a very heavy heart that we are suspending so many of the most crucial routines of our daily lives and life cycle moments,” the council said.

Chabad.org launched a service for people mourning loved ones who are now unable to recite the mourner’s prayer known as “Kaddish” communally.

The virus also was affecting worship at mosques in New York City’s borough of the Bronx.

Alhaji Cheikh Tejan Ndao, the officiating imam of Darou Salam Islamic Community, said the mosque was now being thoroughly cleaned and sanitized before and after prayer services. He added that a cleaning service that comes regularly has increased its visits. Other mosques have altered their practices as well, including canceling meals prepared by members

In North Carolina, bishops of the United Methodist Church and Episcopal Church asked their affiliated churches to cancel public worship services and other gatherings for the next two weeks.

The senior pastor at the nation’s largest United Methodist Church, the Rev. Adam Hamilton, said worship services would be offered only online this weekend, with no in-person access. His 22,000-member Church of the Resurrection has five locations in the Kansas City area.

Spotting the difference between influenza and coronavirus

The coronavirus outbreak will also impact a long-running ideological confrontation within the UMC over the issues of same-sex marriage and ordination of openly gay and lesbian clergy. On Friday, leaders of the UMC’s Council of Bishops asked for the indefinite postponement of the denomination’s general conference scheduled for May 5-15 in Minneapolis at which conservative delegates planned to propose breaking away from the UMC to form a new denomination that would continue to disapprove of the LGBTQ-inclusive policies.

Many of the delegates to the general conference are based overseas, and the UMC bishops expressed concern that some might not be able to travel to Minneapolis.

A senior leader of another major Protestant denomination, New York-based Bishop Paul Egensteiner of Evangelical Lutheran Church in America, asked all congregations in his metropolitan New York region to postpone or cancel in-person services through March 31. He said the regional office would close, and all staffers would work remotely.

However, LifeWay Christian Resources, the SBC’s publishing arm, is offering parents a digital “LifeWay Kids At Home” curriculum to fill a void if children were missing out on Sunday School.

One prominent Baptist pastor, Robert Jeffress of First Baptist Church of Dallas, has been vocal in declaring that public services will continue at his megachurch, even if the congregation needs to be divided to comply with a local ban on gatherings of more than 500 people.

Jeffress noted in an interview with KDFW-TV that the NBA was canceling games.

”What we do is more important that what the NBA is doing. That is entertainment. That’s optional,” Jeffress said. “Worship is essential.”

Many members of the religion, widely known as the Mormon church, are expected to spend the time they would normally be at church on Sunday doing home worship using an online curriculum rolled out less than two years ago by church President Russell M. Nelson as part of a push to emphasize more home-based worship.