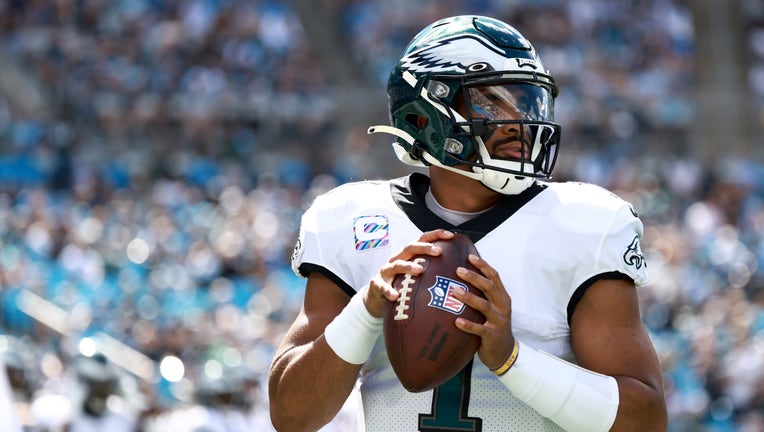 CHARLOTTE, NORTH CAROLINA - OCTOBER 10: Jalen Hurts #1 of the Philadelphia Eagles throws the ball during the first half of a football game against the Carolina Panthers at Bank of America Stadium on October 10, 2021 in Charlotte, North Carolina. (Pho

As Tampa Bay (4-1) prepared to face the Philadelphia Eagles (2-3) on Thursday night, Brady pointed out a few times this week that the Buccaneers lost on short rest last season. That was when Brady forgot the number of downs at the end of a 20-19 loss at Chicago on Oct. 8.

"You have these weeks and you put a lot into them in a really short period of time, like we have," said Brady, who'll play with an injured hand. "It’s like cramming for an exam, you know? You just kind of put everything else to the side and just focus on the game. ... The good part is, if you win, the time on the back end is really helpful. But you’ve got to win.

"Last year we lost, so we’ve got to play good."

The defending Super Bowl champions are coming off a lopsided win over Miami while the Eagles rallied to win on the road at Carolina.

Brady has played against the Eagles in two of his 10 Super Bowl appearances, going 1-1. He threw for 505 yards in a 41-33 loss to Nick Foles and Philadelphia four seasons ago. Foles beat him again with the Bears in that Thursday night loss last year. The seven-time Super Bowl champ is familiar with six-time Pro Bowl defensive tackle Fletcher Cox and defensive end Derek Barnett, who recovered Brandon Graham’s strip-sack to help secure Philadelphia’s championship win.

"It’s a really tough defense. They get a lot of pressure with those guys up front; they have one of the best D-lines in football," Brady said. "They’re doing some different things with their coverages. They have a talented group of players, no doubt. I think they’re kind of an ascending football team. They’re a very dangerous team. They’re very explosive on defense. Fletcher Cox, (Javon) Hargrave, they’re great players. Derek Barnett — I’ve played against him — great player.

"They’ve got a lot of guys that can rush, they’ve got a few real tricky blitzes. In coverage, they really make you earn it, they don’t give you anything. It’s a challenging game, absolutely."

Eagles rookie coach Nick Sirianni is seeking his first win at home in three tries. Sirianni’s playcalling has been questionable since an excellent game plan in Week 1. The Eagles are relying heavily on the passing game and have only given Miles Sanders 48 carries.

"After we come off this Tampa week, you’ll have a long weekend to be able to assess yourself even more," he said. "We’re constantly assessing ourselves as far as our tendencies and things like that, but you get more chances to do that when you’re coming off a long weekend which we will have here this week, because on a short week like this, you’re just trying to get your guys ready to play, get them ready to go and do things that you know you can execute."

Brady leads the NFL’s top-ranked passing offense, but the Eagles are No. 3 against the pass. Darius Slay had two interceptions against the Panthers and Steven Nelson also had a pick to preserve the victory. Philly’s secondary has a tough challenge against Mike Evans, Chris Godwin and Antonio Brown.

"They all have different skill sets, and that makes it a big-time challenge because how you have to defend each guy within each coverage, what we’re playing is different," Eagles defensive coordinator Jonathan Gannon said. "And our guys have to grasp that and understand that, which we do because we have smart players. So it’s going to be a big-time challenge because they got the best ever throwing it to them, too, and they got other weapons as well besides those three guys."

Buccaneers outside linebacker Jason Pierre-Paul is quite familiar with the Eagles from his eight seasons with the New York Giants. It feels different for him now.

"I know any time we played Philadelphia, it was always a fight," Pierre-Paul said. "I think that was our most brutal rivalry was Philly. They didn’t like us, and we didn’t like them. I’m in a whole different (division) now. It’s still NFC, but at the end of the day, that was when I was playing for the Giants."

Hurts has 1,365 yards passing and leads the Eagles with 256 yards rushing. He has thrown for 300 yards in four of his nine starts and run for 45-plus yards in six of them. 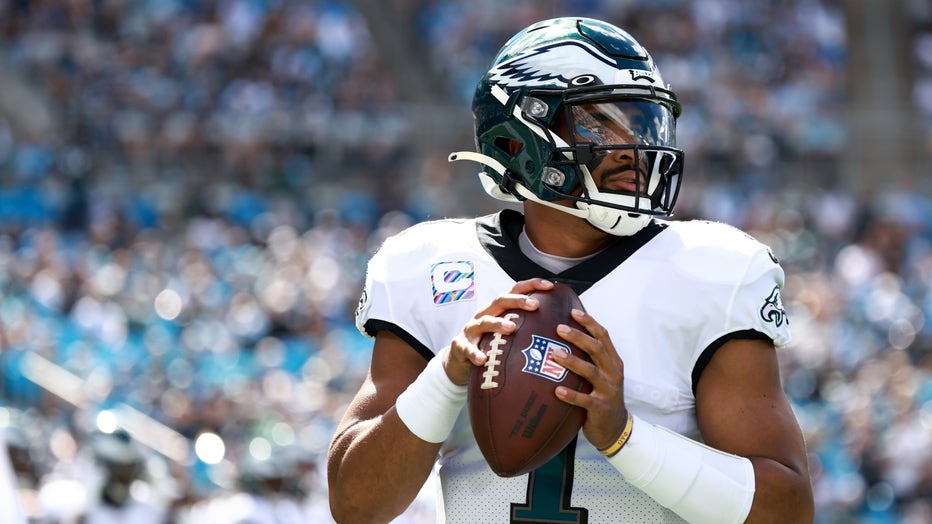 CHARLOTTE, NORTH CAROLINA - OCTOBER 10: Jalen Hurts #1 of the Philadelphia Eagles throws the ball during the first half of a football game against the Carolina Panthers at Bank of America Stadium on October 10, 2021 in Charlotte, North Carolina. (Pho

"Any time you face a mobile quarterback, it places a threat against you because you know he can extend plays with his feet," Buccaneers defensive tackle Vita Vea said. "I played against him in college and he hurt us a lot with his mobility and his arm, so it will be a tough challenge this week going against a guy like Jalen Hurts."

The Eagles won’t have right tackle Lane Johnson for the third consecutive game.