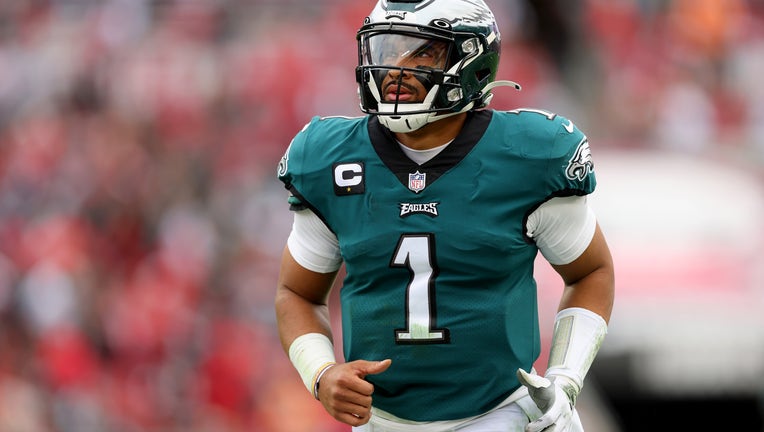 TAMPA, FLORIDA - JANUARY 16: Jalen Hurts #1 of the Philadelphia Eagles runs off the field at the end of the second quarter in the NFC Wild Card Playoff game against the Tampa Bay Buccaneers at Raymond James Stadium on January 16, 2022 in Tampa, Flori

PHILADELPHIA - The Philadelphia Eagles say Jalen Hurts will be the team’s starting quarterback in 2022.

"We talk about Jalen and the growth he had, really as a first-year starter and second-year player, and leading this team to the playoffs," general manager Howie Roseman said Wednesday, just three days after a 31-15 loss at Tampa Bay in the wild-card round.

"I’m tremendously impressed by his work ethic and his leadership. The last time we talked was during camp and we said we wanted to see him take the bull by the horn, and he certainly did that."

Of course, despite answering "yes" twice on questions about Hurts returning as the starter, Roseman could change his mind. If an attractive option emerges in the coming months through trade or the draft, the Eagles can still pursue another QB, and explain that circumstances changed.

Last year at this time, as Nick Sirianni was being hired to coach, Roseman and Sirianni said their preference was to work things out with veteran quarterback Carson Wentz, who had been benched in favor of Hurts down the stretch in 2020.

FOX 29's Chris O'Connell has the latest reaction from Eagles fan as the season comes to an abrupt end.

The Eagles would have avoided the NFL’s largest-ever dead cap charge, $33.8 million, by keeping Wentz but he told them he would rather play elsewhere. They sent their franchise QB to Indianapolis for what turned out to be a first-round pick this year and a third last year.

The Eagles have the 15th, 16th and 19th overall selections in the 2022 draft, including their own pick, Miami’s and the one from the Colts.

Roseman indicated that instead of using some or all of Philadelphia’s three first-round draft picks to obtain a quarterback, the team will look to use its assets to build around Hurts.

"We have to do whatever we can to continue to help him develop," Roseman said. "And how do we do that? By surrounding him with really good players, players who continue to grow. That’s a huge part of developing, they grow. How they are in their second year is not how they are going to be in year four, five, six and seven. And they are also products of the people around them. That’s on us to continue to build this team."

The Eagles are scheduled to make 10 picks overall. The lopsided loss to the Buccaneers, in which the Eagles trailed 31-0, gave ample evidence of the need to use those picks on positions other than quarterback, if Roseman and Sirianni believe Hurts can continue to improve.

Asked if Hurts is aware of the organization’s stance, Sirianni said: "Jalen knows where he stands with us. He knows he’s our quarterback. … I thought he did a great job of getting better throughout the year … there’s no secrets there. He knows he’s our guy."

Roseman indicated he was not going into the offseason thinking that one or two big free-agent moves or trades would make the Eagles top Super Bowl contenders.

"Until you’re really talking about a team that is hosting home playoff games and getting the one and two seed, you’re in building mode," said Roseman, whose 2021 team was the NFC’s seventh seed.

Hurts, a 2020 second-round pick, has made just 20 NFL starts, including Sunday’s unimpressive playoff debut. Factoring into a decision on Hurts would be a quarterback draft class that seems unimpressive, and the fact that precious draft resources would have to be expended in a trade for any veteran quarterback who might really move the needle.

Hurts flourished during a stretch of seven wins in nine games for the Eagles, who started the regular season 2-5 and finished 9-8. The turnaround was accompanied by a focus on building the NFL’s top rushing attack and minimizing Hurts’ responsibilities as a passer. He had an 87.2 passer rating this season, up from 77.6 as a rookie, while increasing his completion rate from 52 to 61.3 percent. Hurts ranked 22nd in passer rating and 26th in completion percentage.

Hurts threw for 16 touchdowns with nine interceptions. He was the team’s leading rusher with 784 yards on 139 carries and he set a franchise record for a QB with 10 rushing touchdowns.

"I’m pleased with the way he developed as a passer, as a quarterback," Sirianni said. "We’ve seen so many things that he got better at. And that goes into … Jalen and the football character that he has, the desire and the ‘want-to’ of how badly this guy wants to be an elite, elite, elite player in this league."

NOTES: Asked whether he will retain Jonathan Gannon if the defensive coordinator doesn’t get any of the head coaching jobs for which he is scheduled to interview, Sirianni said that while he is "really happy with the people that we have in this building," he is still evaluating his staff. ... Roseman said he sees a role for DE Brandon Graham, who will attempt to come back from a torn Achilles in 2022, after turning 34 in April. ... Roseman extolled the contributions of veteran right guard Brandon Brooks but did not respond to a report about Brooks retiring after a string of injuries. ... Roseman acknowledged that having so many high picks this year makes it possible to use some of them to add 2023 picks.