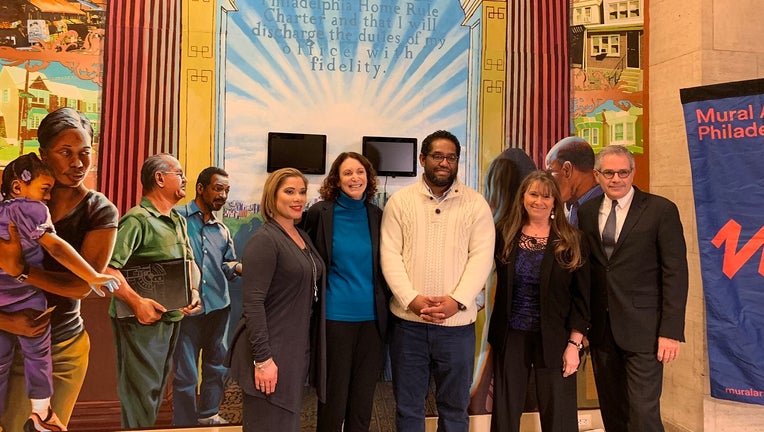 "There are so many people who are kept from sharing their talents, generosity, and humanity because of a flawed criminal justice system," Mural Arts tweeted. "And we are proud to work to change that." (Mural Arts Philadelphia)

PHILADELPHIA - A man sent to prison for life at 17 has been chosen for an arts residency housed at the Philadelphia District Attorney’s Office and will design a public mural that condemns mass incarceration.

James “Yaya” Hough, 45, of Pittsburgh, is one of the hundreds of “juvenile lifers” released across the country since the U.S. Supreme Court banned mandatory life sentences for minors. Hough left prison this summer after serving 27 years for killing a man on a Pittsburgh street corner in 1992.

“My imprisonment was effective, just, but at the same time redemptive,” Hough said at a news conference Thursday in Philadelphia, flanked by District Attorney Larry Krasner and Mural Arts Philadelphia Executive Director Jane Golden. “Without that redemptive part, it would only have been punitive. I don’t think any of us want to live in a society that is based on pure retribution and punishment.”

Hough will be an artist in residence at Krasner’s office, thanks to a $25,000 grant from the Art for Justice Fund.

His work will join the more than 4,000 other Mural Arts projects that adorn buildings and public spaces throughout the city. Hough has worked with the group for more than a decade in classes and projects offered behind bars. The opportunity, he said, gave him a sense of purpose long before he had any hope of getting out.

Now, he has a chance to pay down the debt he feels he owes society for taking a life.

“It goes without saying, but I’ll say it: I am eternally saddened by this,” Hough said. “I have since then tried to live a life that is purposeful and meaningful.”

He doesn’t yet have a design in mind for the piece, but said it will illuminate his view that mass incarceration is “a failed system.”

“Fortunately, it’s slowly going into the trash bin of historically bad ideas. I hope I’m one of the people that can be a living testament to that truth,” he said.

Krasner, a veteran civil rights lawyer, has rocked the city’s criminal justice system since winning office two years ago on a reform platform. He has clashed with the police union and U.S. attorney, an appointee of President Donald Trump, while supporting the release of 10 exonerated inmates, many of whom spent decades in prison.

He praised the mural arts program as a “vertical park” for people in far-flung neighborhoods without the time or money to visit an art museum. He said that Hough’s work follows a line of art produced over the past decade, from author Michelle Alexander’s “The New Jim Crow” to rapper Kendrick Lamar’s Pulitzer Prize-winning music, that illuminates the problem of mass incarceration. Still, he said, the mural is not meant to be a propoganda piece.

“Mr. Hough is here because of the incredible quality of his art,” Krasner said. “He’s going to do something, heaven knows what, that only art can do: speak at such a comprehensive level that it moves people.”