Officials have released audio of the 911 call they received when a medical helicopter crashed in Drexel Hill with four people on board, leaving the pilot with serious injuries.

DREXEL HILL, Pa. - A medical helicopter pilot who crash-landed in Drexel Hill on Tuesday without loss of life or serious property damage is still recovering from his injuries as crews hauled away the shattered remains of the chopper.

Danial Moore, 52, was at the controls of an EC-135 medical helicopter that was transporting an infant patient to the Children's Hospital of Philadelphia Tuesday afternoon when something caused the chopper to fall from the sky.

The helicopter came to a rest near the stoop of Drexel Hill United Methodist Church at the intersection of Burmont Road and Bloomfield Avenue. Moore and his three passengers survived the impact and no property damage was reported.

"It’s a miracle, it’s an absolute miracle, here what you see behind me," Bernhardt said, adding that he's eager to shake the pilot’s hand for getting the helicopter down the way they did.

Xavier Ramos, a driver for FedEx, was making a delivery when the crash happened. He is pictured helping the survivors escape the helicopter as fuel leaked from the wreckage.

Daniel Moore is said to be the pilot of a medical helicopter with four aboard that fell from the sky and crashed onto the street Tuesday in Drexel Hill. Moore, a former military pilot according to his father, was badly hurt in the crash but is expected to recover. Three others, including an infant, survived without injuries. His father, Larry, believes Daniel's 27-years of flying prepared him for the moment.

"We just start pulling out the pilot, and we're just seeing fuel drop all over the ground and just thinking about not blowing up," Ramos said.

Moore suffered seven broken ribs, five broken vertebrae and a cracked sternum, according to his father. Federal investigators from the National Transportation Safety Board briefly spoke with Moore on Wednesday, but he was said to be heavily sedated.

"How much of this is airmanship, to what degree he had control of the aircraft, that's what we're here to find out," NTSB investigator Brian Rayner said. 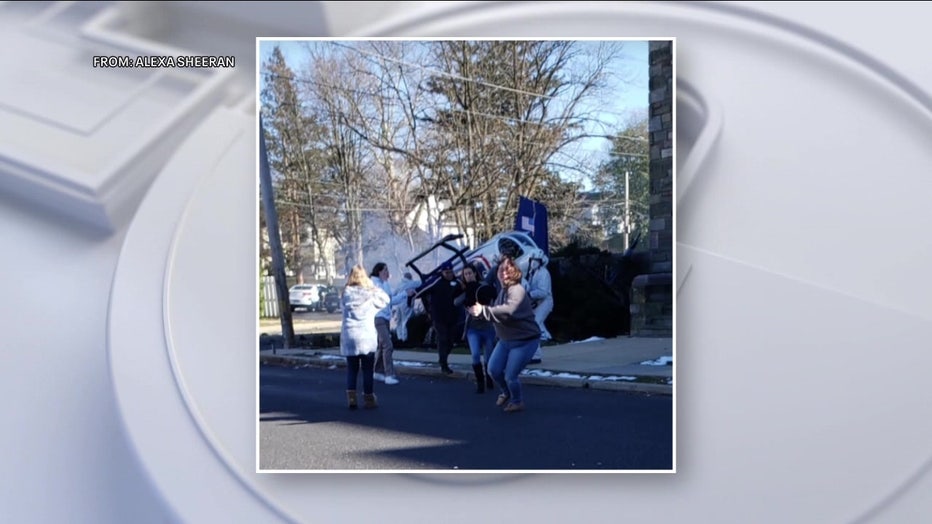 Witnesses helped usher four survivors away from a helicopter crash in Drexel Hill.

Meanwhile, Moore's father told FOX TV Stations that his son was prepared for the moment.

"I wouldn't expect anything less of him, he's got over 27 years of flying helicopters, he's a commercial airline pilot as well, he worked for the CIA, he's done a number of things to prepare him for this flight," he said.

A day after the harrowing crash, a crane and flatbed truck hauled away the wrecked chopper. Investigators will comb through the wreckage and review air traffic control audio.

Danial Moore is said to be the pilot of a medical helicopter with four aboard that fell from the sky and crashed onto the street Tuesday in Drexel Hill. Moore, a former military pilot according to his father, was badly hurt in the crash but is expected to recover. Three others, including an infant, survived without injuries.