PHILADELPHIA - A remarkably violent weekend in Philadelphia that resulted in the deaths of six people and the injuries of 32 others brought Philadelphia officials before the media to address the crime, most notably gun violence, and the efforts being made to combat it.

Thirteen of the 21 police precinct districts experienced a shooting with some of those districts reporting more than one victim.

In total, there were 23 shooting separate, a vehicular homicide, and two stabbings incidents from Friday to Sunday.

In a list of motives, Commissioner Ross pointed to four incidents stemming from arguments, another two  were a result of domestic violence, one was a robbery, one was a road-rage incident, four were gang-related, and the motive remains unknown at this time in six other incidents.

The increase in gun violence could be related to a significant increase in fire arm violations.

“That’s a lot of people, folks. 820 for this time of year is very significant. Something that is very concerning to us and I think the other thing it speaks to is a lack of concern about carrying these guns illegally. Don’t know whether that’s because they’re not concerned about the consequences but I do know that that number is very alarming."

In January, Mayor Kenney announced Operation Pinpoint as one of the initiatives devised to combat the increasing gun violence in Philadelphia.

During Monday afternoon's address, Commissioner Ross reported that only one of the shooting incidents occurred in an Operation Pinpoint zone.

"They were outside of our focused areas – our pinpoint areas. So, clearly, in the interest of full disclosure. We have some concerns about possible displacement and the results that stem from that," Ross stated.

As a part of the effort to be transparent, Ross explained that the Philadelphia Police will be making adjustments as a result of the displacement concerns in relation to Operation Pinpoint.

Within the scope of the weekend's violence, Ross noted that several of the victims had no prior involvement with the criminal justice system. However, a portion of them did have a history with law enforcement in varying capacities.

“But we do have 15 with arrest histories that were known to police. We’ve got basically three who have been shot before – three of the victims. We have two that have been shot multiple times before and I’m talking about the victims right now. The arrests range from everything from narcotics arrests to prior firearms arrests and gang-affiliation as well," he explained.

Outside of Operation Pinpoint efforts, Commissioner Ross explained that the Philadelphia Police Department will be increasing patrol efforts and increasing overtime hours.

On Friday and Saturday nights, Philadelphia Highway Patrol and the Narcotics Strike Force will be working additional hours. Now, they will work until 4:00 a.m. as opposed to 3:00 a.m. as they had done previously.

Other methods that Commissioner Ross disclosed included monitoring crime through intelligence, analysis of their findings, and a willingness to adjust their operations to combat the gun violence in Philadelphia. 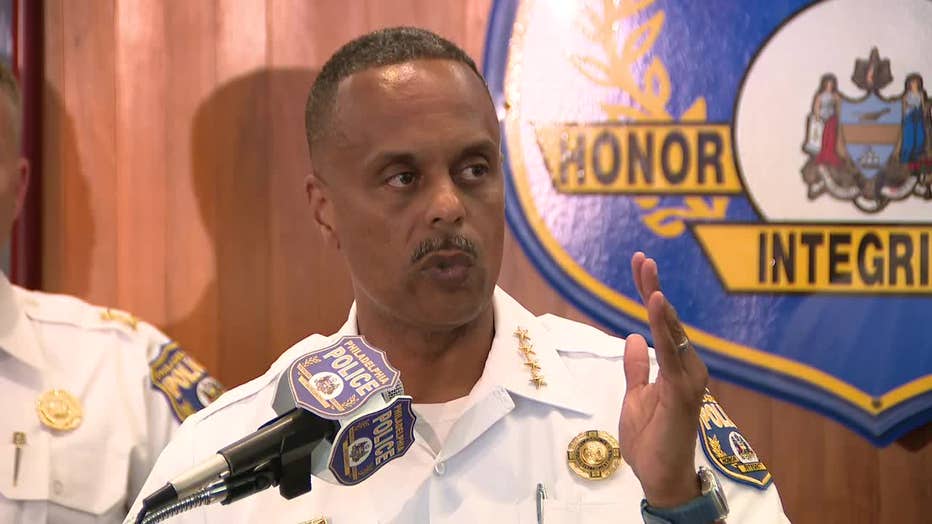 Commissioner Ross made a point of saying that gun violence is often predicated upon revenge.

“The challenge for us and many departments is, as you might imagine, gun violence as it relates to retaliation is largely emotionally driven," he said.

He cited that the shooting, which took place at a graduation party Sunday night, as clearly indicative of the dangers of emotionally-driven gun violence as opposed to gun violence observed in more calculated crimes such as crimes of opportunity.

“If you look at, at least the one incidence from last night, what it must take – the lack of regard for life that you can fire multiple rounds into a crowd of at least 70 people. I mean, how heartless must you be to pull a trigger that many times and hit that many people knowing that would be the likely outcome. I mean it speaks to a greater issue. You are absolutely right for holding us accountable as you can’t possibly hold us more accountable than we hold ourselves. This is something that we do nonstop," Commissioner Ross implored.

The commissioner did not pull his punches in his address, making it clear that the gun violence problem that the city of Philadelphia is facing is one that it has long endured.

"It is the number one issue that we deal with as I’ve said before, the most intractable issue that we contend with and it has been the case for 30 years since I’ve been on this job. So any of you who try to suggest this is something new, you’re either new to the city or you’re being disingenuous. It doesn’t change the fact that it is very serious and that it needs to be addressed and it needs to be addressed from a holistic standpoint," he said.

His address encouraged the Philadelphia community to not only help police in their endeavor to combat gun violence but to also be aware of their role in "having a precipitous decline in gun violence."

Commissioner Ross says that accountability is a large part of the problem as well.

"I am saying that if you are inclined or you have a propensity to resort to gun violence, you should be held accountable. If you know that you are not otherwise legally able to possess a firearm you have no business carrying one on the streets of Philadelphia. And for the young people out there, you should know that if you do so all you’re going to do is put yourself in harm’s way where you’re either not going to remove yourself from trouble and become a potential victim or you’re going to find yourself a potential offender as a result of pulling the trigger on a gun you didn’t have any business having anyway.”

Ross goes on to say that the Philadelphia Police are working to cultivate a relationship with communities and to help struggling individuals in order to combat gun violence.

“We will not rest on our laurels until we touch every single base that we possibly can. People should not have to live like this – worrying about gun violence.”

And though the Philadelphia Police Department is offering solutions, Sen. Anthony Williams has asked Gov. Tom Wolf to declare a State of Emergency on gun violence.

“I think we’re well past the point when those of us who are elected to lead are always reacting,” said Senator Williams. “We must restore some level of public confidence by addressing this epidemic proactively.”

Though there are disparities into how many were killed and injured, as well as how many shootings took place, Sen. Williams requested a number of steps to address the gun violence problem.

Some of those steps were addressed earlier by Commissioner Ross but Sen. Williams also requested redirecting funds to create a crisis intervention and anti-violence programs at both local and state levels.