FOX 29's Chris O'Connell is live outside the Staples Center in Los Angeles.

PHILADELPHIA - Jeered like a traitor just a few miles from the high school where he won a state title, Kobe Bryant stewed on the bench as the final minutes of the 2002 All-Star game ticked away. Nearly every fan in Philadelphia had booed the hometown guy whenever he touched the ball.

Never one to forget a slight, Bryant was stung by the vitriol.

“I’m just out there trying to play and have a good time,” Bryant said. “My feelings are hurt, being from Philadelphia.”

His local roots meant little to the rowdy crowd that would not forgive Bryant for comments from the previous season when the Los Angeles Lakers played the 76ers in the NBA Finals.

Bryant had warned fans that he wasn’t coming home to relive the glory years at Lower Merion High School. Bryant proclaimed he was “coming to Philly to cut their hearts out.” 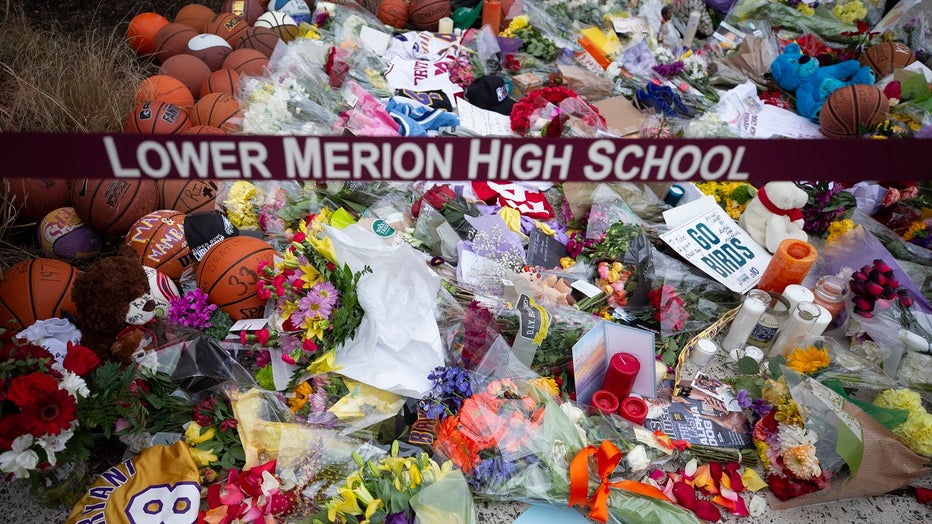 Basketballs, flowers, letters, and jerseys are left at a memorial for Kobe Bryant after he was killed in a helicopter crash, at Lower Merion High School. (Photo by Mitchell Leff/Getty Images)

The Lakers won the championship in five games, a series that began an unforgiving attitude from Sixers fanatics that continued until Bryant’s final NBA game in the city.

Bryant, killed at 41 in a helicopter crash Sunday, had a turbulent relationship with Philadelphia.

At his old high school in the Philadelphia suburbs, Bryant was a superstar, a friend and a benefactor who never lost ties with his beloved Aces. But after he went head-to-head with 76ers star Allen Iverson, Bryant became the All-Star fans loved to hate. They criticized his tony high school and his adopted LA swagger, saying Bryant was not as blue collar or tough as the city of his birth.

Bryant never apologized for saying he wanted to thrash the 76ers, just as he insisted he never forgot where he came from.

He spent much of his childhood living in Italy where his father, Joe Bryant, played pro basketball for several years. When his family moved back to the United States, Bryant went to Lower Merion High School, in an affluent suburb about 20 minutes west of downtown Philadelphia.

Philly native and former Temple star Marc Jackson, who spent seven seasons in the NBA, remembered Bryant “getting his teeth” kicked in during workouts with college ball prospects. The catch, Bryant was only 12.

“You could see he enjoyed it,” Jackson said on Monday. “He enjoyed flourishing in that moment knowing that he was getting his teeth kicked in but it was for a purpose. He saw the other side of it and he embraced it.”

But after 2001, his relationship with local fans became strained, and when NBA Commissioner David Stern presented Bryant with the All-Star game MVP trophy in 2002, the boos were long and loud.

He wanted to cut out hearts; the boos broke his.

“The only people that took that in a negative way were not athletes,” Jackson said. “That’s the mentality you have to have. There are no friends out there. You have to cut hearts out, period. It’s not about trying to take it easy on them because it’s friends or family.”

Bryant always had his supporters, though, the ones who remembered how the teen prodigy about turned Lower Merion into a high school version of his dynasty Lakers.

“We played Chester down at the Palestra, and they were scalping tickets outside for $1,000,” former Lower Merion assistant athletic director Jerry Monzo said. “That was standing room only. I remember courtside you had Coach K, Coach Boeheim, Coach Calhoun. That was the kind of buzz that followed him everywhere he went. We turned people away every single night we played at home.”

Bryant led the Aces to Class AAAA state title at Hershey Park Arena in 1996, the school’s first since 1943. He capped his senior year by going to prom with R&B singer Brandy.

Bryant’s loyalty toward Lower Merion and coach Gregg Downer never wavered, and the Kobe Bryant Gymnasium at the school’s campus was dedicated in 2010.

This week, mourners left flowers, basketballs and posters at a makeshift memorial at the gym he helped fund with a $400,000 donation. Monday’s school day opened with 33 seconds of silence in honor of his retired Aces uniform number.

“It’s really just going to make us work a lot harder to really embody that ‘Mamba Mentality’ and everything he stood for, and work so much harder to embrace that and be examples of what he was,” junior basketball player Bridget McCann said.

Harvey Levin, of TMZ, reveals how he learned of Kobe Bryant’s death

Bryant hadn’t gone Hollywood when he played in the famed Sonny Hill League, a top amateur basketball in the Delaware Valley, flashing his raw talent in summer games at Temple’s McGonigle Hall or other city courts. He was “Philly Tuff” and no doubt would have been as beloved as Iverson had the 76ers selected Bryant No. 1 instead in the 1996 draft. Local media were critical when Bryant decided to skip college.

Four years after Bryant was charged with sexually assaulting a 19-year-old employee at a Colorado resort, he returned home for a March 2007 game against the 76ers and was greeted by a Philadelphia Daily News “HOMETOWN ZERO” headline blasted over his photo on the back page of the paper. The Associated Press tagged along with Bryant on that trip when he toured Lower Merion and met with students and former teachers.

One message he pushed: Philly and Lower Merion were always in his heart.

“It’s always been there,” Bryant said. “Since I’ve been playing in the NBA, I always come back. Always. I’ll never forget what the school has done for me, what the city has done for me.”

The “Mamba Mentality” killer instinct was forged in city pickup games long before he dreamed of the marketing nickname.

“The first day, when he finished working out, he had ice packs on his knees,” Jackson said. “He was 12. He was icing his knees. That’s when I first saw he was different. We’re like 15 at the time, and laughing like, ‘What are you doing, man, icing your knees?’

“He said, ’Because I’m going to have a long career.” 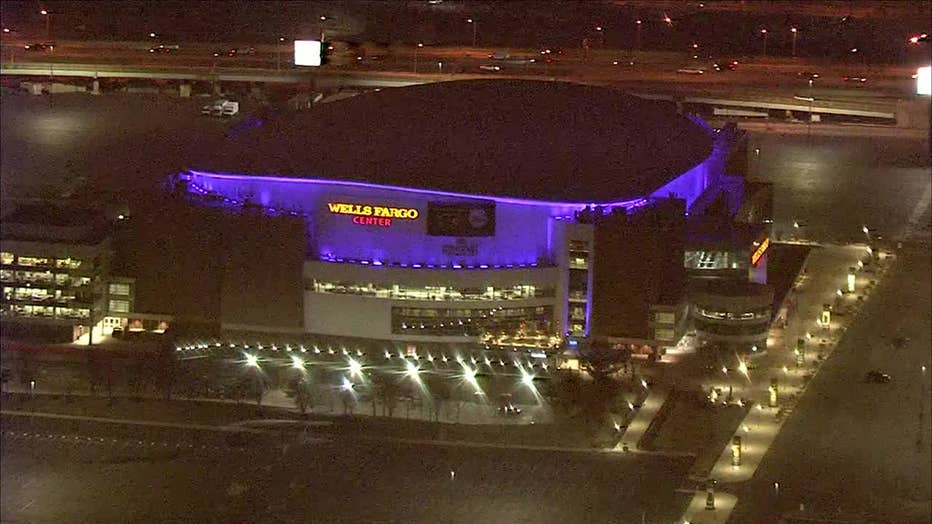 Wells Fargo Center lights up in honor of Kobe Bryant in the wake of his death.

Once his playing career was over, Bryant fit in again as a Philly guy. He gave a pep talk to the Eagles in October 2017 when the team played in California.

“A lot of the message was to pay attention to details, do your job, focus on your assignment,” coach Doug Pederson said. “Sort of have a bulldog-type mentality when you take the field and to be aggressive, and just all the things that he’s learned over his Hall-of-Fame career.”

Bryant’s message must have resonated with the Eagles, because about three months later, they won their first Super Bowl. Bryant’s celebration was a social media sensation. His widow, Vanessa, taped Bryant holding one of his daughters, pumping his fist and high-stepping around the house once the underdog Eagles knocked off the New England Patriots.

By then, the ill-will toward Bryant had dissipated, yielding to “M-V-P!” chants in his final game in Philly in December 2015. He waved to the crowd and bowed his head in appreciation as “Kobe! Kobe! Kobe!” chants filled Wells Fargo Center. Bryant hugged Downer and 76ers great Julius Erving in front of a crowd dotted with purple-and-gold No. 24 jerseys.

Bryant returned to the area last March to promote “The Wizenard,” his young adult fantasy sports book series, to members of the Philadelphia Youth Basketball program. Bryant participated in a book reading that included his high school English teacher.

“The fact that Kobe came as an intellectual and as a creator, not as a baller, spoke volumes to the students,” PYB President Kenny Holdsman said. “Kobe was listening to the kids talk about the themes in his book, and he had this look of just pure joy, like he was seeing what he had created was being put to good use in middle school kids who were trying to figure out the world.”

Bryant and the city he loved so much were whole again, the thank yous flowing each way. The last basketball memory of his time in Philly is not a milestone he achieved, but rather, one set by Lakers star LeBron James, who passed Bryant for third on the NBA’s career scoring list Saturday against the 76ers. James idolized Bryant as a teen and honored him by writing “Mamba 4 Life” on his sneakers before he reflected on the timeliness of setting the mark in Philadelphia.

The All-Stars were aligned again.

“Now I’m here in a Lakers uniform, in Philadelphia, where he’s from,” James said.

Kobe Bean Bryant never wanted anyone to forget it.