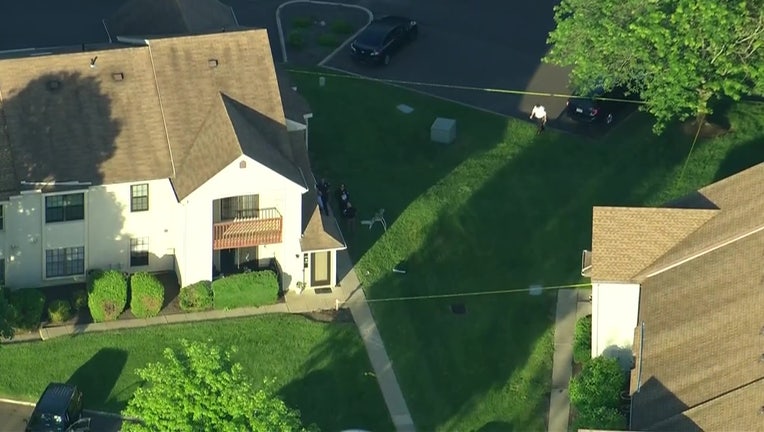 SKYFOX over a home in Northampton where authorities are investigating after two adults were found dead.

NORTHAMPTON TOWNSHIP, Pa. - A man has been charged in connection with a homicide and attempted suicide in Northampton earlier in June.

According to the Bucks County District Attorney, 35-year-old Thadius William McGrath of Chatham, Massachusetts is charged with 1st-degree murder, third-degree murder, endangering the welfare of a child, recklessly endangering another person and related charges.

Authorities originally launched a death investigation on June 8 after police responded to a home on Clark Court for a report of a suicidal person around 5 p.m.

The DA's Office says officers knocked on the door and were met by a four-year-old child covered in blood.

According to police, the child told officers that McGrath killed her mother and then shot himself.

Authorities also say a second child about 1 year of age was also removed from the home.

Police say they found the victim, 31-year-old Samantha Jean Rementer, dead on the floor of a bedroom in the back of the apartment.

Officials say an autopsy reveals she died from ligature strangulation.

McGrath was suffering from a self-inflicted gunshot wound to the face from a 9mm pistol and he was taken to St. Mary's Medical Center for treatment before being transferred to Penn Presbyterian Medical Center, according to authorities.

The DA's Office says the four-year-old child recounted the events in a recorded forensic interview at the Bucks County Children's Advocacy Center.

The child told police that Rementer and McGrath argued before the incident occurred, officials say.

"This man murdered Ms. Rememnter in front of her children, then unsuccessfully tried to take his own life," District Attorney Matt Weintraub said. "I cannot think of two more cowardly acts. He will now be made to pay an exacting price for his crimes."