A man fought against a suspected armed robber and lost his life in the struggle.

NORTH PHILADELPHIA - A man has been killed after he was shot several times inside a North Philadelphia store.

"We heard about five or six gunshots," said Justin Dunlap ran to the door of C&P Beauty Store where he works, just before four Monday afternoon, not expecting what he saw. "A person laying on the ground," he said.

Police say the victim is a 39-year-old man shot at least once in the chest after a robbery inside Broad Deli at Broad and Susquehanna in North Philadelphia. They found the victim face down on the sidewalk. Witness accounts and surveillance cameras revealed it started at the ATM inside the store.

"Our shooter, a male, comes in the store with a female, walks up to individuals at an ATM, points a gun at them and appears to be committing a robbery because the individuals at the ATM put their hands up," said Chief Inspector Scott Small. Police say after that the suspects approach the 39-year-old victim at the checkout counter.

"You see the shooter put a gun to the victim’s face and our victim actually pushes the gun away and they get into a physical struggle," Chief Inspector Small explained. Police said the fight moved outside the store and ended with the suspect firing two shots, a scene caught by cameras. 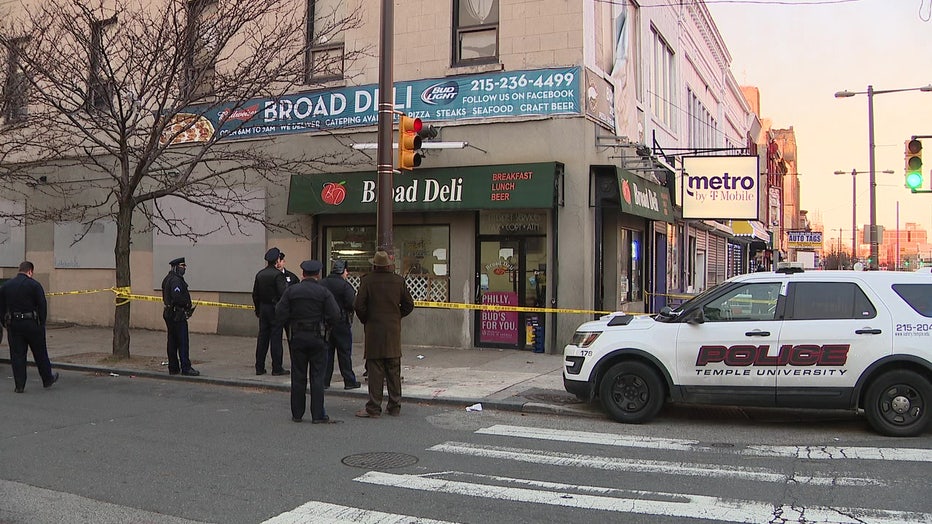 A 39-year-old man was shot multiple times and killed inside a North Philadelphia store, officials said.

The victim died at the hospital. Investigators said they found shell casings from two separate caliber semi-automatic guns. They believe the shooter had both and fired one shot inside the store. The man and woman got into the back seat of a car waiting on Susquehanna. Police said a hat the gunman was wearing fell off as they fled. They hope to get prints or DNA from it. Dunlap thought about the violence while watching the scene from his job.

"I just think it needs to come to a stop. I think we need to start loving each other," he said.

Police say the getaway car is a blue or dark-colored four-door sedan. They found it later Monday night at 9th and Lehigh, but the suspects are still at large.

Seven customers and two employees were in the store when it happened.

The shooting comes just an hour after a Lyft driver, who was licensed to carry a firearm, shot at two men attempting to carjack his vehicle. Both men were hit and hospitalized.