WASHINGTON - The Senate voted Monday to confirm Miguel Cardona as education secretary, clearing his way to lead President Joe Biden’s effort to reopen the nation’s schools amid the coronavirus pandemic.

Cardona, 45, a former public school teacher who went on to become Connecticut’s education chief, was approved on a 64-33 vote.

He takes charge of the Education Department amid mounting tension between Americans who believe students can safely return to the classroom now, and others who say the risks are still too great. 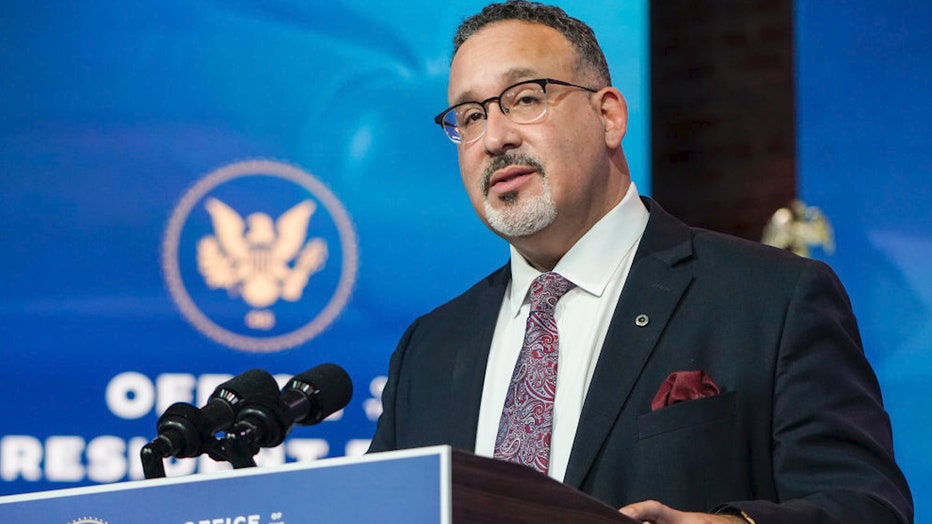 FILE - Miguel Cardona speaks after President Joe Biden announced his nomination for Education Secretary at the Queen theatre on Dec. 23, 2020 in Wilmington, Delaware.

Although his position carries limited authority to force schools to reopen, Cardona will be asked to play a central role in achieving Biden’s goal to have a majority of elementary schools open five days a week within his first 100 days. He will be tasked with guiding schools through the reopening process, and sharing best practices on how to teach during a pandemic.

The Centers for Disease Control and Prevention last month released a road map for getting students back into classrooms safely. The agency said masks, social distancing and other strategies should be used, but vaccination of teachers was not a prerequisite for reopening.

Cardona, who gained attention for his efforts to reopen schools in Connecticut, has vowed to make it his top priority to reopen schools. At his Senate confirmation hearing last month, he said there are "great examples throughout our country of schools that have been able to reopen safely."

President-elect Joe Biden introduced Miguel Cardona as his pick for education secretary on Wednesday, saying Connecticut's education chief and life-long champion of public schools is the right pick to lead.

The debate has become a political firestorm for Biden, who is caught between competing interests as he aims to get students into the classroom without provoking the powerful teachers unions that helped put him in the White House. He says his goal of returning students to the classroom is possible if Congress approves his relief plan, which includes $130 billion for the nation’s schools.

Republicans have rebuked Biden for failing to reopen schools faster, while teachers unions opposed the administration’s decision to continue with federally required standardized tests during the pandemic.

The tricky terrain is nothing new for Cardona, however, who faced similar tension navigating the pandemic in Connecticut, and who has won early praise even from Biden’s critics.

Republicans in Congress have applauded Cardona’s efforts to reopen schools in Connecticut, and some see him as a potential ally in their support for charter schools. Teachers, meanwhile, see him as a partner who brings years of experience in education and knows the demands of the teaching.

The nomination continues a meteoric rise for Cardona, who was appointed to lead Connecticut’s education department in 2019 after spending 20 years working in Meriden, Connecticut, public schools — the same district he attended as a child.

He began his career as a fourth grade teacher before becoming the state's youngest principal at age 28. In 2012, he was named Connecticut’s principal of the year, and in 2015 he became an assistant superintendent of the district. When he was appointed state education commissioner, he became the first Latino to hold the post.

Cardona grew up in a public housing project in Meriden, raised by parents who came to Connecticut from Puerto Rico as children. Through his career, he has focused on closing education gaps and supporting bilingual education. It’s a personal issue for Cardona, who says he spoke only Spanish when he entered kindergarten and struggled to learn English.

Cardona was the first in his family to graduate from college, and his three degrees include a doctorate in education from the University of Connecticut. He and his wife, Marissa, have two children in high school.

His deep roots in public schooling fit the criteria Biden was looking for in an education secretary. During his campaign, Biden vowed to pick a secretary with experience in public education. It was meant to draw a contrast with then-secretary Betsy DeVos, a Michigan billionaire who spent decades advocating for school choice policies.

In an increasingly fractionalized world of education, Cardona has vowed to be a unifier. At his confirmation hearing, he promised to engage with "the vast, diverse community of people who have a stake in education." He added that, "we gain strength from joining together."

As he works to help schools reopen, he will also be tasked with helping them address the damage the pandemic has done on student learning. He has echoed Biden’s call for further education funding, saying schools will need to expand summer academic programs and hire more counselors to help students with mental health issues.

He's also likely to face an early test as he weighs how much flexibility to grant states as they administer standardized tests. Last week, the Education Department ordered states to continue with annual testing but said assessments could be offered online or delayed until fall. The agency also held out the possibility that states could be granted "additional assessment flexibility" in certain cases.

Some states are already pushing for that extra flexibility, including Michigan, which is asking to replace state tests with local "benchmark" assessments that were administered this year. It will be up to Cardona to decide how much leniency to provide.

Republicans have also set the stage for a fight over transgender athletes. At last month’s hearing, Sen. Rand Paul, R-Ky., raised objections with policies that allow transgender girls to participate in girls’ athletics. It’s the subject of a legal battle in Connecticut, where some cisgender athletes are challenging a state policy that lets transgender students participate as their identified gender.

Pressed by Paul to take a stance on the issue, Cardona said he would support the right of "all students, including students who are transgender."