A K-9 was stabbed by a man who led police on pursuits along I-295 and the New Jersey Turnpike, according to authorities. A trooper was also injured after being struck by a flashlight.

BELLMAWR, N.J. - Authorities say a New Jersey State Trooper and K-9 were injured while attempting to arrest a knife-wielding man following a pursuit.

Troopers from Bellmawr Station responded to the report of a shirtless, knife-wielding man standing outside of his vehicle on Interstate 295 in the area of exit 28 in Bellmawr Borough around 2:15 p.m. Monday.

When troopers arrived, the man entered his vehicle and drove away. When troopers attempted to stop the vehicle with lights and sirens, the suspect continued to flee, traveling northbound on Interstate 295. The driver exited Interstate 295 at exit 36A onto State Highway 73 before entering the New Jersey Turnpike at Interchange 4.

Troopers continued to pursue the suspect as he traveled northbound on the New Jersey Turnpike until the suspect's vehicle was disabled.

Troopers ordered the driver to exit the vehicle, but he refused, so a State Police K-9 was utilized to assist troopers entering the vehicle to apprehend the suspect. As they attempted to gain control of the suspect, he allegedly stabbed the K-9 with a knife. The troopers removed the injured K-9 from the vehicle and the suspect exited the vehicle. As the troopers arrested the suspect, the man struck a trooper with a flashlight, according to authorities. 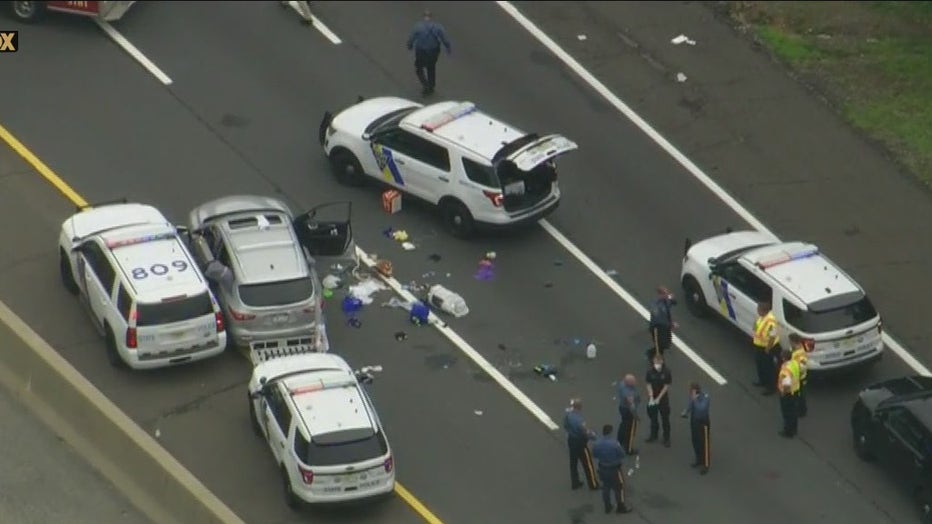 The suspect has not been identified at this time.