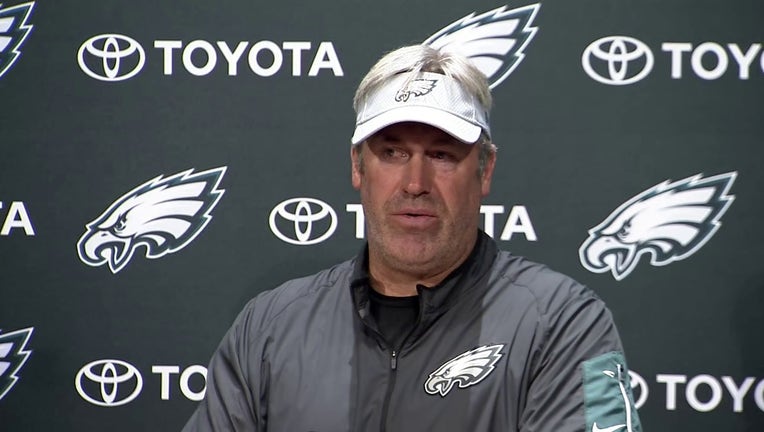 PHILADELPHIA - Eagles head coach Doug Pederson's future on the sidelines in Philadelphia is "not firm," according to a new report from ESPN's Chris Mortensen.

Following a turbulent and disappointing season, some believed that Pederson would return for his sixth season in Philadelphia. Mortensen, however, writes that team owner Jeffery Lurie needs to be confident in Pederson's vision for the future in order to stick with the coach.

The two will meet again "soon," according to Mortensen.

Earlier this month, ESPN's Adam Schefter reported that Pederson was "expected to return next season." In a tweet, Schefter said Pederson and Lurie met to "discuss plans for the 2021 season."

MORE: Report: Doug Pederson expected to return next season, Schwartz will not

With or without Pederson, the Eagles' coaching staff will look different next fall. Defensive coordinator Jim Schwartz announced last week that he is stepping down after a five year run in Philadelphia.

"I have given my heart and soul to the game of football, not just over the last five years here, but throughout my 32 years as a coach," Schwartz said. "Although my passion for the game remains strong, it is best for me to step back from the day-to-day of coaching for the time being."

Pederson lead the Eagles to three straight playoff appearances prior to this year; including the team's first Super Bowl win over the New England Patriots. He was hired in 2016 to replace Chip Kelly and has amassed a record of 32-22.

Philadelphia was the first team eliminated from playoff contention in the miserable NFC East this season. Their season came to an end after a much maligned loss to Washington.