Philadelphia police have released the officers’ names following a police-involved shooting that left a man they say was armed dead in Logan.

PHILADELPHIA - Philadelphia police have released the officers’ names following a police-involved shooting that left a man dead they say fired shots at officers in the city's Logan neighborhood last week.

Around 6:45 p.m. Wednesday, police say Officer Christopher Burton and Officer Charles McCairns, both uniformed, were patrolling the area near Broad Street and Somerville Avenue when they witnessed a blue Kia Optima fail to stop at a stop sign.

The officers conducted a traffic stop and signaled for the driver of the Kia to pull over, and the driver pulled over on Somerville Avenue at 15th Street.

Four occupants, three males and one female, were inside the vehicle and police gathered information on all four to "conduct inquiries on the occupants," police say. After running their information, the officers found that the driver had an outstanding warrant for parole/probation violations out of Philadelphia.

The officer initially thought that 24-year-old James Alexander, who was sitting on the passenger side of the backseat, also had an outstanding warrant for "bail jumping" out of Wisconsin. Police later learned that the "bail jumping" warrant for Alexander returned on a different individual, similarly named, with a similar date of birth, but differing FBI number. 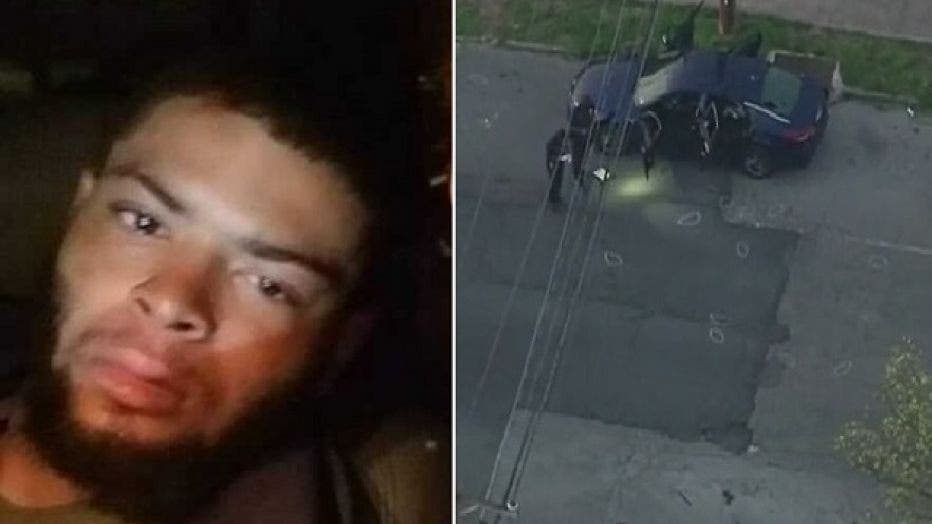 24-year-old James Alexander was shot and killed after police say he fired at officers during a traffic stop on Wednesday.

Due to the wanted status, Officers Burton and McCairns requested additional backup officers via Police Radio. Shortly thereafter, Officer Michael Braun and his partner, Officer David Tamamoto, along with and Officer Matthew Ponente and his partner, all in full uniform and operating marked patrol vehicles arrived on location.

All the officers then approached the vehicle to remove the driver and Alexander. The driver complied with commands to step out of the vehicle.

Police say Alexander removed a firearm from the front of his waistline.  In response, Officer McCairns yelled, "He’s got a gun" and tactically retreated, along with Officers Tamamoto and Ponente.

In response, Officers Burton and Braun, who were positioned on the driver’s side, and Officers McCairns, Tamamoto and Ponente, positioned on the passenger’s side initially, then while creating distance from Alexander, discharged their weapons, striking Alexander.

Alexander was transported to Einstein Medical Center where he later died. Police transported Officer Ponente to the hospital due to sustaining a perforating gunshot wound to his left foot.  He was treated and released.

Investigators say they conducted interviews with the other three passengers inside the Kia. According to police, one of the passengers claimed Alexander had alerted them that he had a gun on his person and "state that he could not go back to jail."

The rear passenger stated that he observed Alexander lean back and motion to his front waistline.

Police say another witness stated he observed Alexander on the sidewalk, facing away from the officers (westbound) extend his arm in the opposite direction while discharging at police. Other witnesses stated that they heard two quick shots, a short pause, followed by multiple gunshots

After reviewing body camera footage of the incident, police claim Alexander reached into his waistline, removing what appears to be a firearm. Investigators say he points it in a northerly direction and a cloud of smoke is observed emanating from inside the Kia, from the rear passenger’s seat.

"Utilizing deadly force is one of the most difficult decisions that an officer will ever face," said Police Commissioner Danielle Outlaw. "These actions have long-lasting effects on everyone, not just those directly involved in these incidents. I want to assure the public that a thorough and complete investigation will be conducted into this police-involved shooting."