UPPER MERION TWP, Pa. - A procession was held on Sunday for a Montgomery County firefighter who police say was killed by a drunk driver while he was aiding a two-car crash on the Schuylkill Expressway over the weekend.

The body of Tom Royds was lead by a motorcade of emergency vehicles from the Upper Merion Corner's Office to a local funeral home late Sunday afternoon. Loved ones and fellow first-responders lined a route through the community Royds served.

"Tommy was a good guy, he always had a smile on his face, he loved fighting fires," Bob Coleman said. "It's a sad day, he's a true hero."

State police said emergency responders were called shortly after 3 a.m. Saturday to a collision involving two cars in the westbound lanes of I-76 in Lower Merion Township. Police said the trooper was speaking with one of the drivers when a sport utility vehicle drove up on the right shoulder and hit the trooper, three firefighters and one of the cars.

Alex George reports on the firefighter killed in the line of duty while attending an accident scene on the Schuylkill Expressway.

The trooper and two firefighters were taken to Penn Presbyterian Medical Center and another firefighter was taken to Paoli Hospital, where he succumbed to his injuries, police said. The Lower Merion Township fire department identified him as Tom Royds of Belmont Hills Fire Company and said he went into cardiac arrest at the scene. The condition of the other injured emergency responders wasn't immediately available.

Police said the SUV driver was arrested at the scene. Court documents indicate that Jacquelyn Walker is charged with vehicular homicide while driving under the influence, aggravated assault by vehicle, reckless endangering and other counts. Court documents list the defendant, who turned 63 on Saturday, as residing in Little Egg Harbor, New Jersey, while state police said she is from Pemberton, New Jersey. 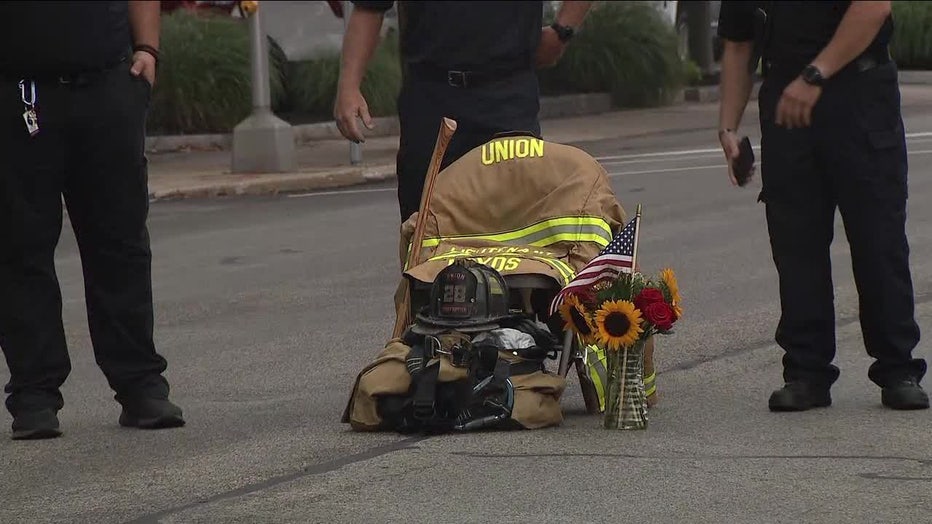 Firefighters set up Tom Royds' gear on a chair during his procession.

Walker was taken to Montgomery County Prison in lieu of $500,000 bail. Court documents indicate that she requested representation by the public defender’s office, which could not be reached over the weekend; a listed number for her could not be found Saturday.

Police said both drivers involved in the initial crash were charged with driving under the influence.