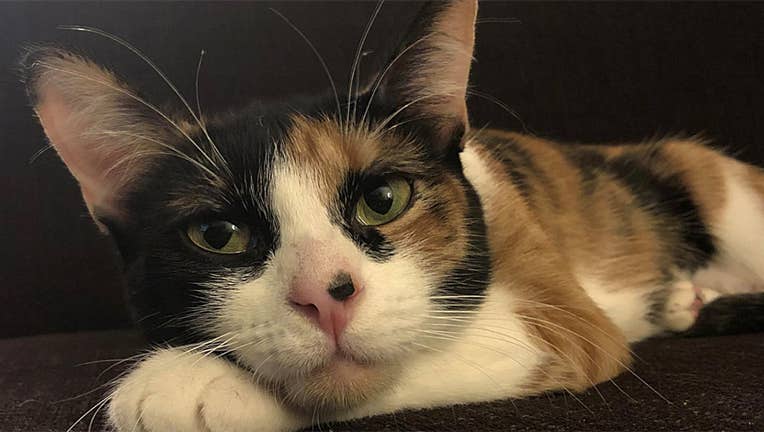 Rescue cat Lilly (pictured) recently saved her owners after she sniffed out a dangerous gas leak in their home.

LAKE OSWEGO, Ore. - Sometimes, curiosity actually saves the cat -- and her owners, too.

Lilly, a rescue cat in Lake Oswego, Oregon, saved her owners when she sniffed out a dangerous gas leak at their home on Friday, according to local reports.

Lilly and her owner, Sandi Martin, had been playing in the living room when Lilly walked over to the gas fireplace and started sniffing the valve, according to a release from Lilly’s previous shelter, Cat Adoption Team (CAT).

"I thought that was kind of strange," Martin told CAT. "She’d never done that before."

Cat helps itself to some milk during live-streamed church service

A cat stole the show during an online prayer service after it was caught on camera stealing some milk.

However, Martin decided to check the valve, too.

"I went over and sniffed and there was a natural gas smell," Martin told KGW. "It was very, very faint so I didn't really trust my nose."

She said her husband also smelled gas when she asked him to check.

The couple’s gas company told them to turn off everything, even their phones, and open the doors to the house.

When the gas company worker arrived about 20 minutes later, he tested the leak.

"He came in and tested it and, in fact, he said it was a dangerous gas leak," Martin told KGW.

"So, then he tested all the other sources of gas and went outside and cut off the pipe to the gas there and capped it off and shut down the fireplace," Martin added. "She might have saved our lives."

Had Lilly not alerted Martin to the leak, gas could have built up in the house, which could have caused a fire or an explosion, KGW reported.

Martin told the station that Lilly has also saved her in another way, too. She said that not being able to see her kids and their families over the holidays because of the coronavirus pandemic put her "in a dark place," but adopting Lilly helped bring her out of that, KGW reported.

According to the CAT release, Lilly has 21 toes -- which is three more than cats typically have -- as well as feline leukemia virus.