PHILADELPHIA - The Schuylkill River spilled over its banks on Thursday morning following a night of intense rainfall and damaging storms from a system that once formed Hurricane Ida.

Incredible aerial footage from SkyFOX showed just how far the water encroached into Philadelphia to submerge city streets, buildings and parked cars. Iconic Boathouse Row along the river was entirely surrounded by water and even parts of Center City became victim to flooding.

Philadelphia Fire Commissioner Adam Thiel on Good Day Philadelphia said the Schuylkill River has not flooded this severely since 1869.

According to an advisory, there have been several people rescued from cars that became overwhelmed with floodwater.

PennDOT workers spent the day pumping water back into the river as the expressway quickly became the city's hottest tourist attraction.

By Thursday night, I-76 was reopened in both directions between South Street and I-676. However, I-676 between I-95 and I-76 remains closed at this time. Kelly Drive also remains closed.

The Schuylkill River has exceeded its banks in Philadelphia following a night of intense rainfall and damaging storms.

Philadelphia was not the only area impacted by the Schuylkill River flooding. FOX 29's Jenn Frederick was in Conshohocken, Montgomery County where the rising floodwaters overcame streets and almost entirely submerged the first level of a parking garage.

Frederick estimated that the floodwater measured about 10 feet deep and encroached into Conshohocken by 5 roughly blocks. At one point, Frederick said she witnessed a SEPTA bus or train car sweep through the floodwaters.

FOX 29's Jenn Fred is in Conshohocken where the Schuylkill River has flooded following drenching downpours from the remnants of Hurricane Ida.

In nearby Bridgeport, SkyFOX captured rescue crews attempting to save people from their homes after the Schuylkill spilled over into a riverside neighborhood.

Using a dinghy, rescue crews during one operation escorted at least two people from the first floor of a swamped home. Another group of people trapped on the second floor of their home were lead down a ladder to safety. 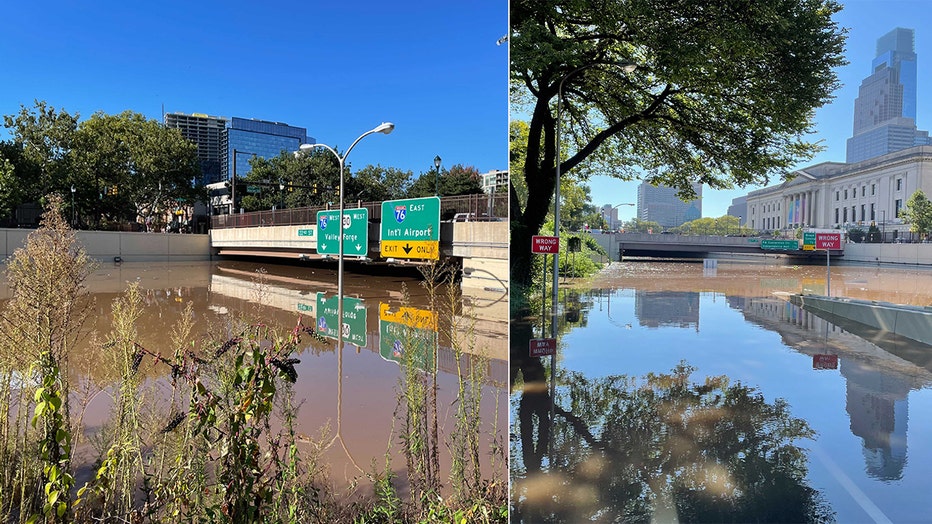