FOX 29's Jeff Cole has the latest after Sean Kratz was sentenced to life in prison without the&nbsp;possibility of parole in the slayings of three young men found on a Solebury Township farm.

DOYLESTOWN, Pa. - Sean Kratz, who was convicted in the slayings of three young men found buried on a Solebury Township farm, has been sentenced to life in prison without the possibility of parole.

Authorities said Monday that they would not pursue the death penalty against the 22-year-old, who was convicted of first-degree murder and other offenses. 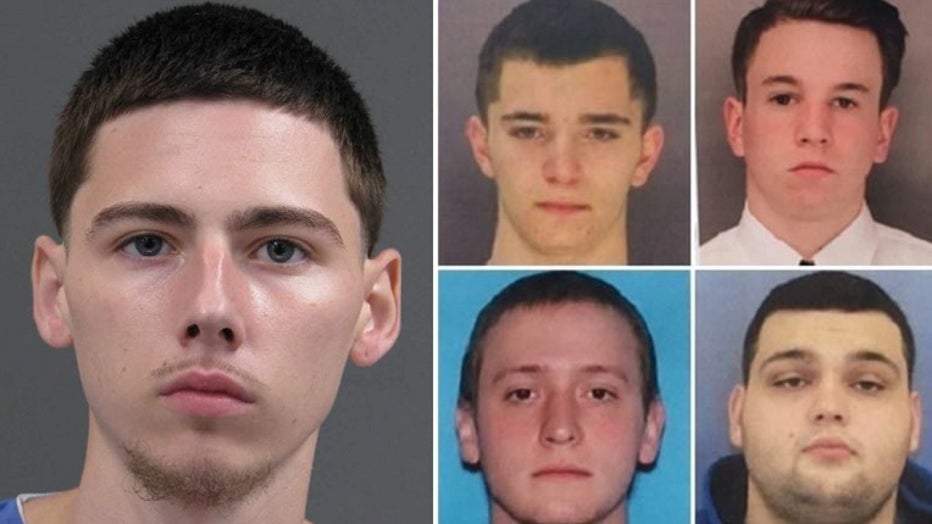 Sean Kratz, 22, was convicted of first-degree murder and other offenses.

The Bucks County district attorneys' office said Monday that it was dropping its pursuit with the understanding of the victims' families.

“I am awed by the grace demonstrated by the Finocchiaro family in helping me to make this difficult decision to not pursue the death penalty against the defendant,” District Attorney Matthew Weintraub said.

“I am reminded, that we do this not for the defendant’s benefit, but for our own. It is the right thing to do, and now this criminal saga is over," Weintraub added. "I hope that the families of Jimi Patrick, Dean Finocchiaro, Tom Meo, and Mark Sturgis can take solace that both DiNardo and Kratz will die in prison for what they did to their boys.”

Authorities say Kratz helped his cousin, 22-year-old Cosmo DiNardo, lure the men to a Solebury Township farm where they were shot, set on fire and buried.

Kratz showed little emotion as he was convicted, dropping his head and staring at the defense table as the verdict was read.

The Philadelphia man went to trial after rejecting an earlier plea deal. DiNardo, who was identified as the leader of the plot, pleaded guilty and was sentenced to life in prison.

Prosecutors said DiNardo lured the victims to his family's Solebury farm in 2017. Authorities said Kratz shot 19-year-old Dean Finocchiaro in the head and served as a lookout while DiNardo killed Mark Sturgis, 22, and Tom Meo, 21. The victims’ bodies were burned in a makeshift pig roaster and buried in a 12-foot-deep hole.

Kratz was convicted of first-degree and second-degree murder for killing Finocchiaro and voluntary manslaughter in connection with the other two victims.

Prosecutors said the victims went to the farm because DiNardo had promised to sell them a large quantity of marijuana. Kratz and DiNardo were "on a mission to kill, rob, burn and bury bodies,” Assistant District Attorney Kate Kohler told jurors.

She rejected the defense claim that Kratz was coerced by DiNardo, saying he could have called for help or even turned the gun on his cousin. She called the slayings "just something fun to do that day because they could."

One of the victims survived his gunshot wound, but Kratz told police that DiNardo then ran over him with a backhoe.

After the killings, prosecutors said, Kratz and DiNardo went for cheesesteaks.

There was a possibility that DiNardo would testify at his cousin’s trial, but prosecutors said he rejected their subpoena. Kratz did not take the stand in his own defense.

During the trial, jurors heard a recorded confession that Kratz made as he was preparing to plead guilty to third-degree murder. Kratz wound up rejecting the offer, which would have put him in prison for at least 59 years for the crimes.

His attorney, A. Charles Peruto Jr., said Kratz was manipulated into giving the confession.

Prosecutors and the defense are under a gag order in the case and declined comment after the verdict.