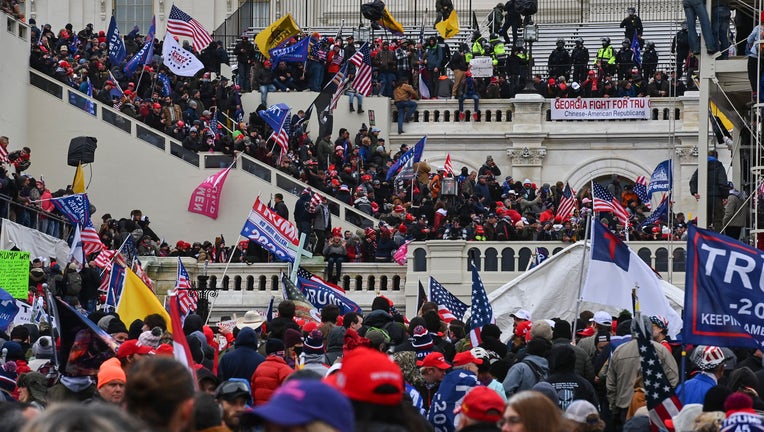 WASHINGTON, DC - JANUARY 6: Protesters take over the Inaugural stage during a protest calling for legislators to overturn the election results in President Donald Trump's favor at the U.S. Capitol on January 6, 2021 in Washington, D.C. (Photo by Rick

CAMDEN - A self-proclaimed "dating and relationship strategist" from Camden County was arrested Thursday by federal agents for his alleged participation in the pro-Trump insurrection at the U.S. Capitol two weeks ago.

According to court documents, Stedman used his Twitter account to post photos from inside the Capitol on Jan. 6 and later discussed his experience during the riots on live stream videos.

An affidavit says Stedman was reported to an FBI tipline by two former classmates who followed him on Twitter. The first tip was made by a former college classmate a day after the violent riots at the Capitol. The second tip was given weeks later by someone who claims to have known Stedman since high school.

Both witnesses accused Stedman of posting a video describing his experience inside the Capitol during the riots. According to one witness, Stedman claimed to have been "in the first wave" of rioters that made it all the way to the House chamber.

An investigation into Stedman's Twitter account allegedly uncovered several pictures from inside the Capitol during the deadly riots. The following day prosecutors say Stedman posted a live stream on Twitter titled "COVID / CABAL – PATRIOT’S DAY" where he allegedly discussed attending the insurrection.

Investigators used that live stream video to match Stedman's identity with photos from the New York and New Jersey Department of Motor Vehicles and speaking appearances where Stedman is introduced by name.

The New Jersey United States Attorney's office says Stedman will appear in court over video on Thursday afternoon in Camden.