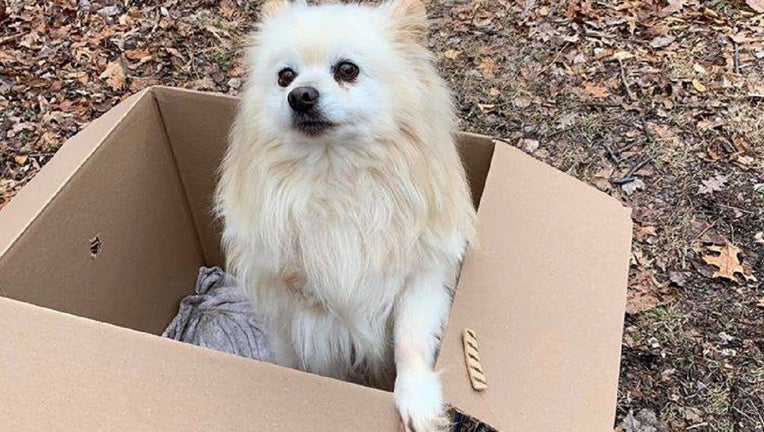 LEHIGHTON, Pa. - Staff at a Pennsylvania animal shelter were preparing to leave for the day Saturday when an elderly woman called in a panic.

The woman said she spotted a dog inside a box on Skyline Drive in Lehighton, Carbon County.

"This section of road where the dog was found is seldom traveled," Carbon County Animal Shelter wrote in a Facebook post. "Not to mention it [was] going to be dark soon."

The shelter said the dog appeared to have been dumped that day, as the moving box was dry. No food or water was inside, just a towel with two air holes punched on either side of the box.

The dog, who seems to suffer from eye issues, was able to open the top of the box, but unable to climb out.

"We do not know if it is male or female because the poor thing is so scared it didn't want us looking," the shelter added.

'He never gave up': After 1,076 days at animal shelter, Bentley finds forever home

"As much as we want to hate right now, we are so thankful to this woman was in the right place at the right time and saved this pup," the shelter said.

Shelter officials stressed that the dog is safe, warm and has a full belly, while calling for an end to animal abandonment.

"This dumping has to stop. We are always just a phone call away!" the shelter wrote. "Reach out to us or a shelter/rescue in your area before it comes to this."

Anyone with information regarding the incident is urged to contact the shelter or their local police.