A woman in England is livid after allegedly finding a piece of a face mask baked into a McDonald’s chicken nugget, claiming her young daughter nearly choked on it while eating.

Laura Arber claims to have found part of the blue PPE in at least two of the 20 nuggets she purchased for her children from a Mickey D’s in the town of Aldershot, in Hampshire, on Tuesday, the Mirror reports.

Arber and three of her four kids were eating the nuggets at home when young Maddie, age 6, began choking.

"My little daughter just started choking and I put my fingers down her throat to loop it out there was just blue with the sick," Arber said, per the outlet. "I thought ‘what on earth is this?!’ I didn't even think it could be the chicken nugget but looked over at the box and all you could see was this blue coming out of another chicken nugget in the box of 20."

"And the mask is cooked into it, like a part of the mixture and it's clearly a mask. You can see the seam and how solid it is in there,” Arber, 32, continued.

Arber said she called the chain and returned to the restaurant to speak with the manager. The McDonald’s employee allegedly told her that the nuggets were not cooked on-site, but did not apologize or confirm that the sale of nuggets would stop temporarily.

“Before I left I said, 'Are you going to keep serving them?' And they were carrying on serving them and that was the big thing for me,” Arber alleged. "I just couldn't believe the way the management [was] handling it."

Arber has since shared her story to a local Facebook group.

"What if I had walked out of the room and my daughter had choked?" she wondered. "She could have died. It's a split second thing.”

The Sun reports that one of Arber’s children was born in intensive care, and the mother spent time in accommodations through Ronald McDonald House Charities UK. Prior to the chicken nugget fiasco, Arber said she held McDonald’s in high regard because of how they helped her family.

When reached for comment on Wednesday, a spokesperson for McDonald’s UK shared the following statement with Fox News and apologized for the incident: 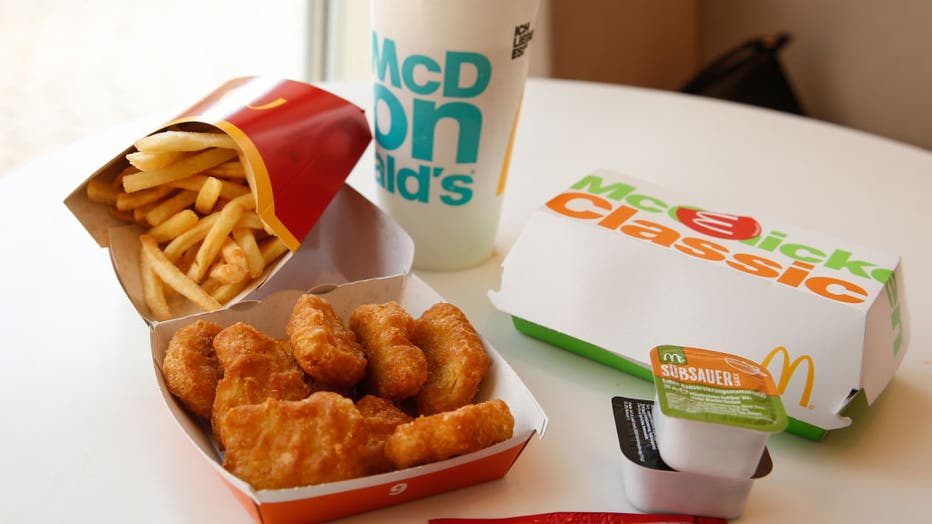 A cardboard box with Chicken McNuggets, McChicken Burger, a beverage cup with a soft drink, a bag with tomato ketchup and French fries. (Photo by Gerald Matzka/picture alliance via Getty Images)

“Food safety is of the utmost importance to us and we place great emphasis on quality control, following rigorous standards to avoid any imperfections,” the rep said. “As soon as we were made aware of the issue we opened a full investigation with the relevant supplier, and have taken action to ensure any product from this batch is removed from restaurants.”

“We would like to offer a full apology to the customer in question and understand they are currently in conversation with our Customer Services team,” the spokesperson added.