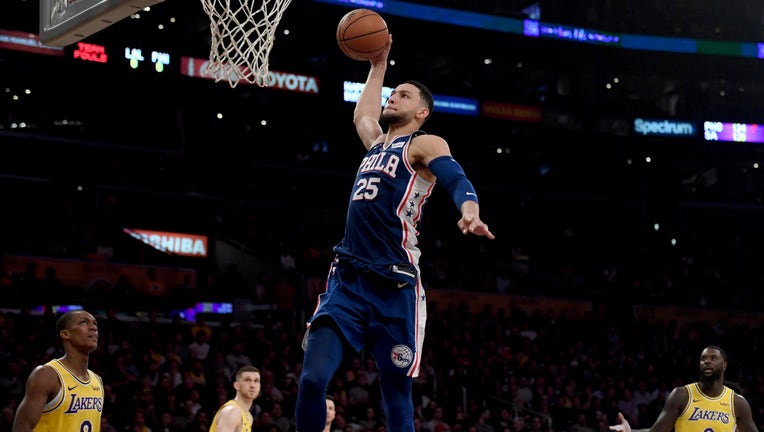 The 76ers' Ben Simmons #25 dunks the ball during their game against the lakers during at the Staples Center in Los Angeles, Tuesday, Jan 29, 2019. The 76ers defeated the Lakers 121-105. (Photo by Hans Gutknecht/MediaNews Group/Los Angeles Daily News

PHILADELPHIA - As the NBA’s free agency period continues this week, the Philadelphia 76ers are reportedly working to make sure Ben Simmons remains a Sixer for years to come.

After reports earlier this week the team was negotiating an extension with the 6’10” point guard, ESPN’s Adrian Wojnarowski reports that under new salary cap projections, Ben Simmons' maximum contract total has crept slightly higher to $170M.

Simmons was selected to his first All-Star team last season. He averaged 16.9 points, 8.8 rebounds, and 7.7 assists per game.

So far this offseason the 76ers have reportedly parted way with Jimmy Butler in a sign-and-trade with the Miami Heat. JJ Redick also agreed to sign a two-year deal with the New Orleans Pelicans, according to reports.

In the meantime, the 76ers have been working to rebuild their starting five as they agreed to terms with forward Tobias Harris on a five-year deal over the weekend. The team also reportedly added veteran big man Al Horford from their rival, the Boston Celtics. In the Jimmy Butler trade, the 76ers will reportedly receive guard Josh Richardson in return.

According to reports, the team also held on to forward Mike Scott and added another big man in free agent Kyle O'Quinn.