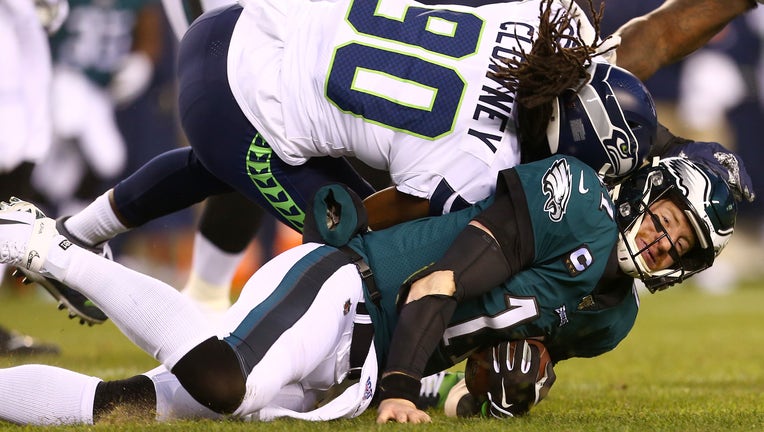 Quarterback Carson Wentz #11 of the Philadelphia Eagles is hit by Jadeveon Clowney #90 of the Seattle Seahawks during the NFC Wild Card Playoff game at Lincoln Financial Field on January 05, 2020 in Philadelphia, Pennsylvania. (Photo by Mitchell Leff

PHILADELPHIA - The NFL is reviewing the hit that apparently knocked Carson Wentz out of Sunday’s NFC Wild Card matchup between the Eagles and Seattle Seahawks, according to a report.

Wentz was speared in the back of the head on a helmet-to-helmet hit from Seahawks defensive end Jadeveon Clowney as he fell to the ground on a broken play.

Pelissero says the NFL is not looking to suspend Clowney and that the investigation may not even result in a fine. Clowney was not flagged on the play, which sideline Wentz for the rest of the game with a concussion.

What the Eagles need to address this offseason

NFL referee Shawn Smith told a pool reporter there was no flag because the contact was deemed “incidental.”

"He was a runner and he did not give himself up," Smith said.

“I don't intend to hurt anybody in this league, let me just put that out there,” he said. "I've been down the injury road; it's not fun. My intention was not to hurt him. I was just playing fast."

Wentz didn't address the legality of the hit on a Monday morning post on social media.

Last season, while Clowney was a member of the Houston Texans, he was fined more than $40,000 for a brutal hit on former Eagles quarterback Nick Foles.