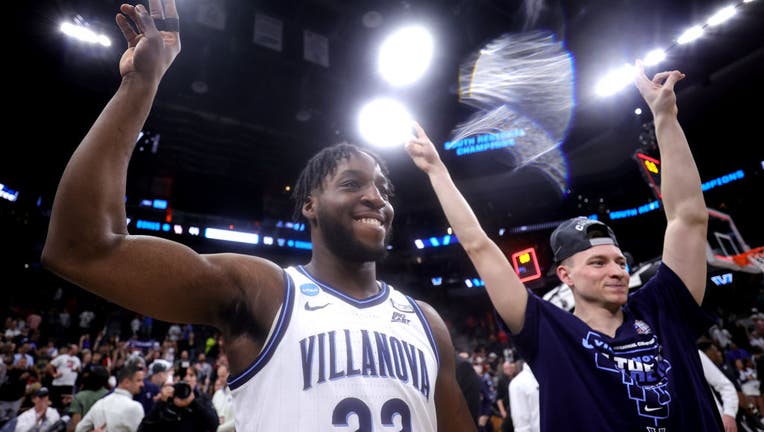 SAN ANTONIO - Jermaine Samuels had 16 points and 10 rebounds as Villanova advanced to its third NCAA Final Four in the last six NCAA Tournaments with a grind-it-out 50-44 victory over Houston in the South Region final Saturday.

Caleb Daniels added 14 points for the Wildcats (30-7), and fifth-year senior Collin Gillespie's only made field goal was a clutch shot late.

With both teams willing to limit possessions, the first spot for this year's Final Four in New Orleans was settled in a game that was ugly to watch with all the missed shots.

The Wildcats and coach Jay Wright won't complain as he seeks to add a third national title to the ones he won in 2016 and 2018. Villanova will play either Kansas, the only No. 1 seed remaining, or 10th-seeded Miami in the Final Four next Saturday in New Orleans as it seeks its fourth championship overall.

Taze Moore had 15 points and 10 rebounds for the Cougars (32-6), who were denied making consecutive Final Four appearances for the first time since 1982-84 during the Phil Slama Jama era. The starting five was completely changed from last season, including Moore and two other senior newcomers.

After Villanova missed three shots on the same possession — and was still without any second-chance points in the game — Moore got the long rebound on the break. After initially slowing things down, Moore scored on a drive against Gillespie, getting Houston within 42-40 with 5:25 left.

It was the closest the Cougars had been in the game at AT&T Center, only about 200 miles from their campus, and the crowd was in a loud frenzy when Wright called timeout. They never got a chance to take the lead.

Gillespie, who played in the national championship game for the Wildcats in 2018, was 1-of-6 shooting. But his only field goal came on the possession after the timeout when he stepped inside the 3-point line and hit a jumper with 5:02 left.

There was a nearly two-minute scoring drought before Justin Moore made two free throws, with a foul by J’Wan Roberts bailing out the Wildcats with the shot clock about to run out. Those were their only second-chance points in the entire game.

Villanova had scored the first five points of the game, including a 3-pointer by Samuels on the first shot.

Villanova's Moore suffered a lower leg injury when he slipped while dribbling in the final minute of the game and was on crutches during the Wildcats' postgame celebration.

Villanova: This is the fourth time in a row that Villanova won when getting to a regional final and advanced to the Final Four, following 2009, 2016 and 2018. The Wildcats are 20-3 in NCAA tourney games since 2016. ... They are 9-0 in March, their largest winning streak this season, and have won 14 of 15 overall since the first week of February.

Villanova will play in the national semifinal game against the Midwest Region champion. Kansas and Miami play Sunday in Chicago.