15-year-old girl shot in the head while playing basketball

Marcus Espinoza reports on the police investigation as the teen fights for her life.

NICETOWN-TIOGA - A 15-year-old girl is fighting for her life after she was shot in the head at a park in Nicetown-Tioga.

Officials say the girl was at a basketball court at Jerome Brown Playground on the 1900 block of West Ontario Street when someone opened fire Tuesday night, just before 9 p.m.

The girl was rushed by medics to Temple University Hospital and was listed in extremely critical condition, suffering a gunshot wound to her head. The entire incident was caught on camera. According to authorities, the girl was playing basketball and was about to take a shot when shots were fired and she collapsed.

"Another child was out enjoying the summer evening, playing a game, hanging out, doing what kids are supposed to do and was shot twice in the head. There are too many people out there committing careless acts of violence like this on the regular. When will enough be enough?" questioned Deputy Police Commissioner Joel Dales. 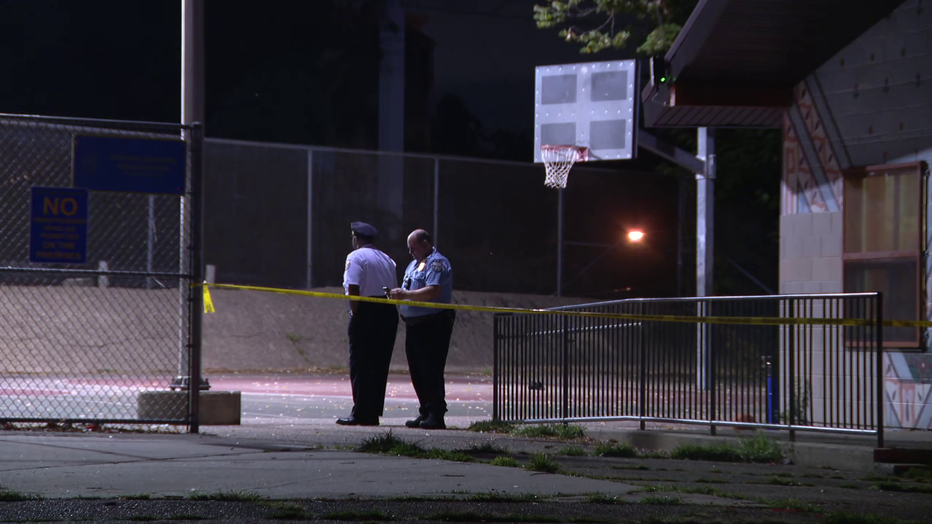 Police say a 15-year-old girl was shot in the head while playing basketball in Nicetown-Tioga.

Homicide detectives could be seen using metal detectors and checking for cameras on Wednesday as they returned to the scene to gather more forensic evidence.

"Right now, we absolutely believe in the young victim was definitely not targeted. She was hit by a stray bullet. We are working to identify who may have been the intended target, but right now, we don’t know a lot, at this point," Deputy Commissioner Benjamin Naish commented.

Deputy Commissioner Naish says they have solid video evidence. They are begging for anyone who knows anything to come forward with information anonymously.

"There are people who know things. They can supply us with information anonymously and we may be able to make an arrest on that. If everybody keeps quiet, then it’s not going to solve the problem," Deputy Naish remarked.

"We’re not asking people to stand up in court, we’re asking people to get on the phone and whisper some information about who they saw do what and we’ll take it from there," Mayor Kenney explained.

City officials say 140 kids, 17-years-old and younger, have been the victims of gun violence, including 27 fatalities, in 2021.