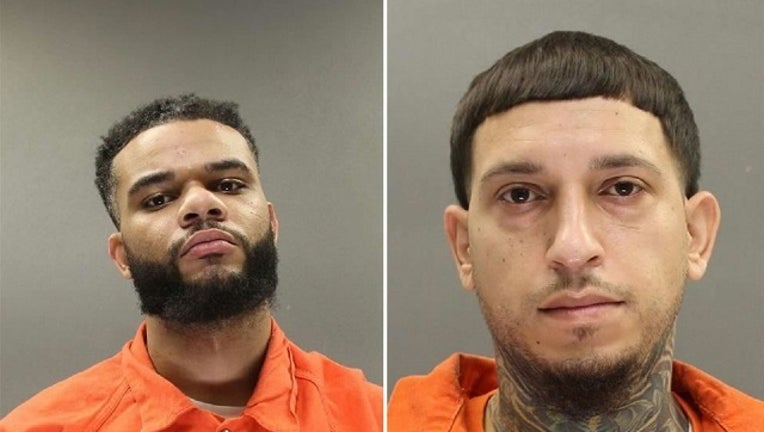 BURLINGTON COUNTY, N.J. - Two Philadelphia men who were traveling at a high rate of speed on the Tacony-Palmyra bridge in December have been charged with causing a five-car collision that killed one of the drivers, according to prosecutors.

Jonathan Ramos, 28, faces vehicular homicide, leaving the scene of a fatal accident, causing death while driving with a suspended license, and related charges.

Brandon Moore, 23, was charged with vehicular homicide and two counts of endangering the welfare of a child.

When police arrived on the scene on Dec. 28 around 7 p.m., they found a heavily damaged Honda Civic and discovered that the driver had been killed by the collision. The driver was later identified as Gerardo Francisco Perez Martinez of Camden.

Multiple people were taken to Cooper University Medical Center in Camden for treatment.

According to the Burlington County Prosecutor’s Office, the investigation revealed that Ramos and Moore were both returning to Philadelphia from New Jersey.

Bridge surveillance video and witness statements concluded that Moore, who was driving a 2018 Dodge Charger, struck the passenger side of Ramos’s 2015 Jeep Grand Cherokee, which led to the fatal collision with the Honda Civic, prosecutors said.

Prosecutors said Moore reached a top speed of 112 mph, and Ramos at one point was traveling at 106 mph where the speed limit is 45 mph.

Investigators say following the crash, Ramos exited his vehicle and walked away from the crash scene, but first, he asked another driver to call his phone because he was unable to locate it.  Police later recovered Ramos’s phone inside the vehicle he was driving, according to prosecutors.

Moore was taken into custody on Jan. 22 and Ramos surrendered with his attorney Monday.