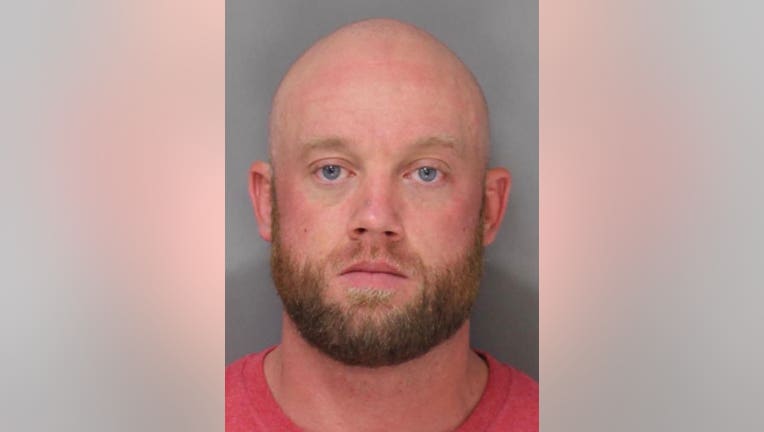 BENSALEM, Pa. - A Bensalem man who was out on bail in two domestic violence cases attacked the same victim a third time last week, authorities say.

Patrick Dando, 35, of Elmwood Avenue, was taken into custody Monday night by agents with the U.S. Marshals Service and Bucks County Detectives. He had been on the run since the Friday afternoon attack.

Most recently, Dando was charged with felony counts of aggravated assault and strangulation, along with misdemeanor counts of simple assault, disorderly conduct, receiving stolen property and theft by unlawful taking and a summary offense of harassment.

He was originally charged with strangulation, simple assault, and harassment for attacking the victim in her Falls Township apartment on Aug. 7, 2020. During that assault, Dando grabbed the victim by the neck, threw her onto the bed and covered her mouth and nose to prevent her from screaming. The victim suffered injuries to her neck, chin, cheeks, and lips.

He was arraigned by Magisterial District Judge Joseph P. Falcone, who set bail at $40,000, 10 percent. Dando was able to post bail the next day.

Months later, on Oct. 26, Dando attacked the same woman after she told him she was ending their relationship.

Despite her objections, Dando showed up at her apartment and started an argument that got physical when he grabbed her by the neck and threw her to the ground. Dando prevented her from leaving the apartment and took her phone, so she could not call for help. The victim persuaded Dando to let her take the dogs outside to use the bathroom, and she was able to get to her car and flee to the Falls Township Police Station to report the assault.

Dando was charged with strangulation, false imprisonment, simple assault, and harassment. Magisterial District Judge Jan Vislosky set his bail at $25,000 unsecured, prompting Assistant District Attorney Katz to file a motion to have his bail revoked, so he could be sent back to jail. It was denied on Nov. 20.

In the most recent case, the victim was found injured inside the laundry room at her apartment complex on March 5.

A Falls Township Police Officer located the victim limping up the stairs from the laundry room with abrasions to both knees, elbows, feet, chest, and face. She also had bruises to her face and neck, which was consistent with being strangled.

The victim told police Dando let himself into her apartment and told her he wanted his dog back. Dando was not allowed to have contact with the victim as part of his bail agreement and an emergency protection-from-abuse order the victim obtained after the second assault. Dando started arguing with the victim and backed her into a corner. She repeatedly told him to leave the apartment, but he refused.

The victim later discovered that Dando had taken her cellphone and spare key fob to her car. The assaults were investigated by the Falls Township Police Department and Bucks County Detectives and the U.S. Marshals Service assisted in taking him into custody.

"We take our responsibility for public safety seriously," District Attorney Matt Weintraub said. "Our instincts were 100% accurate when we argued that Mr. Dando’s bail must be revoked for his second domestic assault on this same victim. He stands accused of strangling and assaulting this same victim for a third time. Now, there is no doubt that the only way that we can keep the public safe from Mr. Dando is by keeping him in jail."