Eagles fans fall onto field while cheering on Hurts

Eagles fans fell onto the field after a gate broke while quarterback Jalen Hurts walked down the visitor's tunnel. Hurts helped a fan to his feet as a group swarmed him for a selfie.

WASHINGTON - Eagles fans excited to cheer on quarterback Jalen Hurts after Philadelphia's win over Washington on Sunday pressed hard against a gate along the visitor's tunnel and fell onto the field.

Hurts, who has guided the Eagles to three straight wins, stopped in his tracks as fans fell at his feet and pushed him against the adjacent wall.

Hurts helped one fan to his feet as a group swarmed the second-year quarterback for a quick selfie. 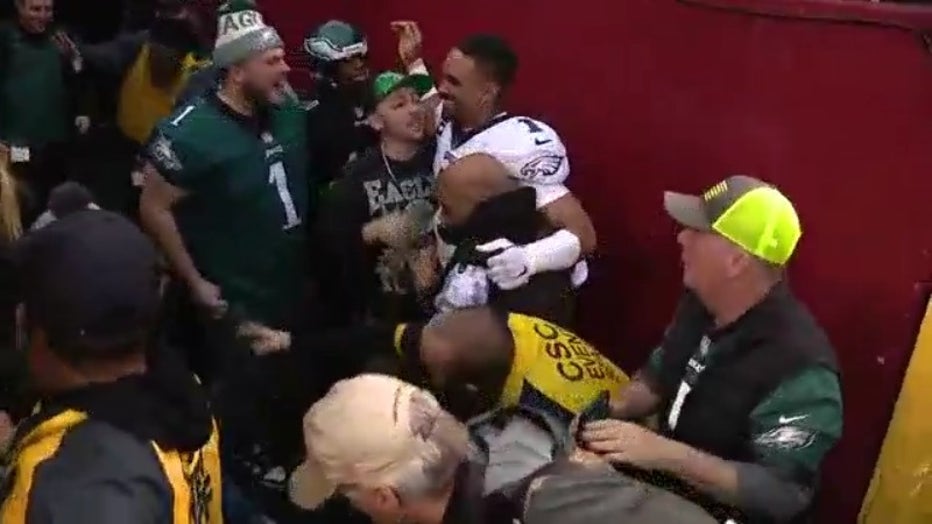 Quarterback Jalen Hurts greets fans who fell onto the field when a gate broke.

FedEx Field security separated the fans and Hurts. No one appeared to be seriously injured.

Philadelphia improved to 9-7 on the year with a 20-16 win over Washington on Sunday. Hurts ran six times for 45 yards and was 17 of 26 passing for 214 yards in leading the Eagles to a fourth consecutive victory. Pending other results around the NFL, they could have an NFC wild-card spot locked up by the end of the night.

Philadelphia will draw another division rival next Sunday as the Dallas Cowboys visit The Linc.