Rick Flick's family is searching for answers after he was struck by a hit-and-run driver while raking leaves over the weekend. He's now in a medically-induced coma.

PHILADELPHIA - A Delaware County family is asking for help after a hit-and-run recently left a family member in a fight for his life.

South Elmwood Avenue is a busy road dividing the towns of Glenolden and Folcroft. Homes dot the tree-line street and Sunday is a day for yard work since there is less traffic.

Sunday evening, longtime Glenolden resident Richard Flick, was raking his leaves out of the street and back to the curb.

Police say he was standing on the edge of the road around 5:40 p.m. when he was struck by a vehicle that was heading south.

"I found Rick's shoes here. This is where he must have been hit, because this is where the rake was dropped, and his shoes were," Rick's wife Carrie Hamilton explained to FOX 29's Jeff Cole.

Flick, over 6-feet tall and 200 pounds, was tossed out front of a home two doors away after the impact.

Police say the driver took off. They're looking for a smaller vehicle that likely has front-end damage.

Flick was gravely injured with multiple broken bones and deep wounds to his head and eye. He's in Thomas Jefferson University Hospital in a drug-induced coma.

Police say there were no witnesses or clear security camera video, so they too are seeking the public's help. 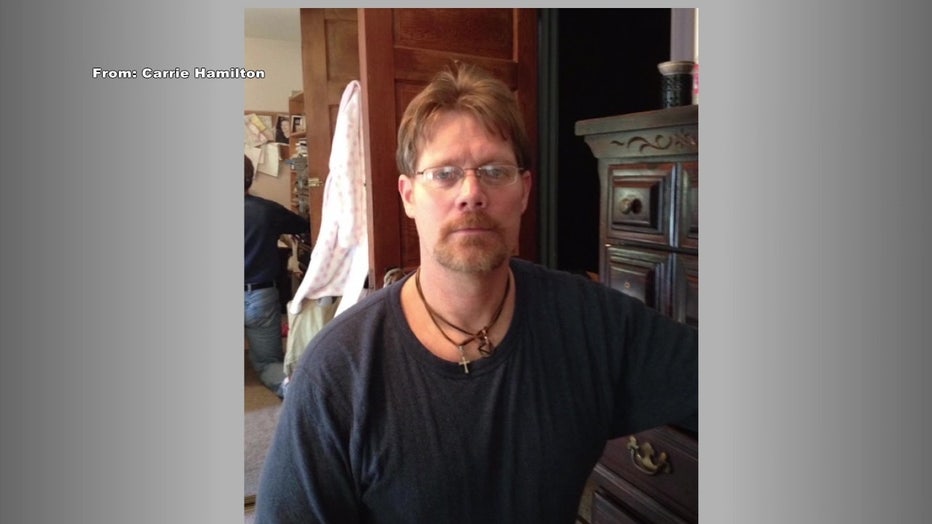 Rick Flick is recovering in the hospital after he was struck in a hit-and-run in Delaware County. (Photo via Carrie Hamilton)

"There has to be people that saw a car that was damaged. One of the neighbors said he saw a broken windshield but is not sure what the car looked like," Hamilton explained.

Neighbors say South Elmwood can be treacherous with speeders, and Rick Flick may have paid the price.

Family members believe the 56-year-old life-long Delaware County resident will recover from his injuries but will face a long road back.

"I’ve been with him for 19 years. I don’t know how to function without him," Hamilton added.

Anyone with information about the vehicle or incident is asked to contact Glenolden police.