FOX 29's Lauren Johnson has the latest on the violent weekend that left a number of people, including a young boy, dead.

“This weekend’s horrific violence is a stark reminder that COVID-19 isn’t the only crisis plaguing our city," Kenney said "Gun violence continues to traumatize our communities and cut Philadelphians lives tragically short."

The mayor highlighted the tragic death of a 6-year-old boy in Holmesburg who was fatally shot in the chest on Sunday afternoon.

Police say the boy was inside a home with other children on the 4600 block of Kendrick Street when he sustained a gunshot wound to the left side of his chest. He was pronounced dead at Jefferson-Torresdale Hospital.

The child's death marked a Sunday in which five people were killed by gun violence in less than 10 hours. In those shooting, six people were injured by gunfire, including an 11-year-old girl.

Elsewhere in the city on Sunday, a 37-year-old woman died after she was shot 12 times in the torso on the 1900 block of Clarence Street in Kensington.

A deadly double shooting in the Point Breeze section of Philadelphia claimed the life of a man in his 20s. Investigators say the man was shot several times in the head on the 1300 block of South 17th Street and pronounced dead on the scene.

Authorities say another man in his 20 was fatally shot in a second double shooting in the Port Richmond district. The victim was reportedly shot several times throughout the body and pronounced dead at Temple University Hospital. 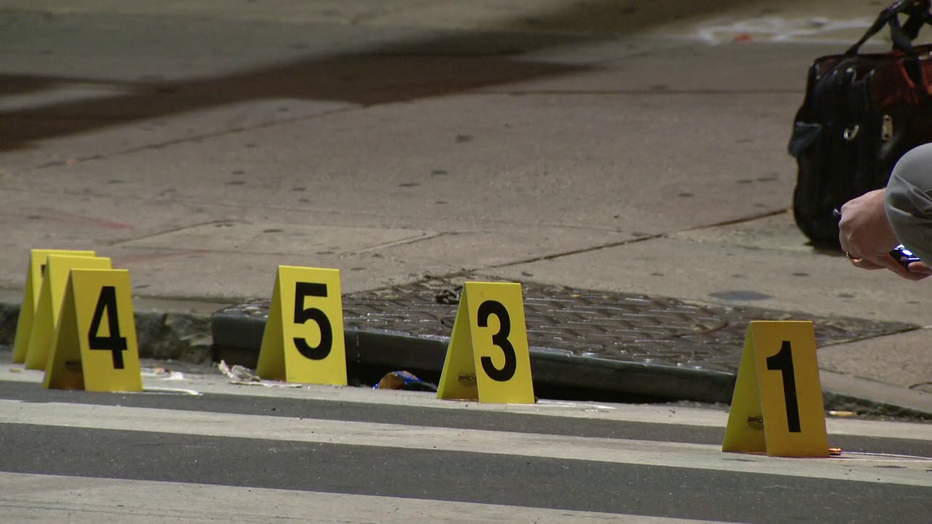 Police say a 43-year-old man became the fifth shooting death of the day when he was gunned down on the 2300 North Croskey Street. The unnamed man was reportedly shot in the back of the head and pronounced dead on the scene.

Overnight, a 15-year-old boy has died after he was shot during a triple shooting in Overbrook. The teen was reportedly shot once in the head and placed in critical condition at Lankenau Medical Center. He succumbed to his injuries late Sunday night.

Two additional victims, a 35-year-old man and a 36-year-old man, were also injured in the gunfire. The 15-year-old victim was later identified as Angelo Walker.

"My heart breaks for their loved ones and I extend my deepest sympathies as they process this unimaginable loss," Kenney said.

No arrests were reported in connection to Sunday's cluster of homicides. City officials are urging anyone with more information to contact the anonymous tip line is 215-686-TIPS.