VILLANOVA, Pa. - Friday night parents proudly watched Villanova students’ hard work culminate with a walk across the stage as graduates. As they start the next chapter of their lives, they had a special commencement speaker, one who is also turning the page at Villanova.

"I love you too," Wright said to the crowd as he prepared to speak.

The stadium full of loving family members, not to cheer on a sports team, but to congratulate their soon-to-be-graduates. They were there to praise the efforts of the students that worked so hard to earn their degrees and to listen to the wise words of their beloved coach and, oddly enough, fellow member of the class of 2022.

The students will forever be known as the class that graduated despite the trials and tribulations of the pandemic.

"I’m in awe of each one of you," Wright said. "Your determination, resiliency and fortitude will go down in history. I’m so proud to be a part of you today. I hope you will consider me to be an honorary member of the class of 2022."

For over 20 years, the name Jay Wright has been synonymous with the university. Over that time, he inspired the student body with his prowess and knowledge on the court.

He brought that energy to the stage to mentor the entire class of 2022 as the commencement speaker.

"Live your life for others. Be kind and selfless. Be smart and be a lifetime learner. Never stop learning," Wright said. 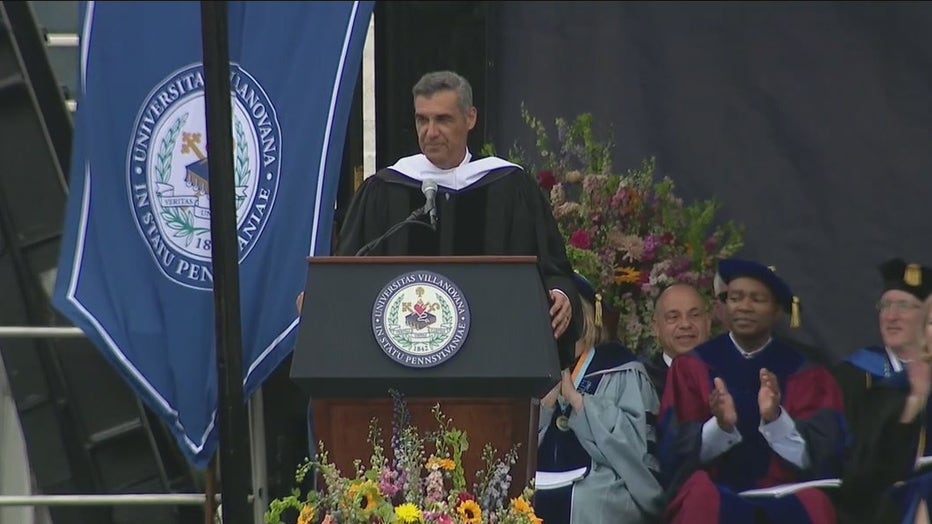 Jay Wright delivers commencement address to the Villanova class of 2022.

Sophia Scoboria had just earned her Chemical Engineering degree and said the whole campus petitioned to have Wright as the speaker, when they found out he was retiring a few weeks ago.

"We never get to see him other than, like, distant on the basketball court, so that was really cool," Scoboris said. "It felt super personal, you know?"

"As selfish as it is, I’m glad he’s coming out with us," said Chemical Engineering graduate Francesca Stadtman. "I feel like it was a nice shared experience we had together."

In total, 3,000 students will graduate this weekend, with 1,700 receiving their Bachelor degrees Friday night.

"We’re all team players," said Physics graduate Christopher Roberto. "We’re all playing for the team on the front not on the back. We have to think about our community."

This past season, Villanova Men’s Basketball advanced to the final four.

One of Wright’s proudest accomplishments is that every player who spent four years in the program earned his degree. Knowing that, he proudly sent this team out into the world as graduates.

"You are Villanova’s gift to the world," Wright said in closing. "I’m proud to be a part of your class. I respect you, I love you. Go Cats."

Wright is now the Special assistant to the president.

The law school and graduate programs commencement will be on Saturday, May 12th.