PHILADELPHIA - The family of a Temple University student who was shot and killed during an attempted robbery in North Philadelphia on Sunday is calling for justice.

The family of Samuel Collington released a statement on Monday, less than 24 hours after the 21-year-old was killed a few blocks from Temple’s campus.

"Sam Collington – our son, brother, nephew, and cousin - was and is our hero, and this senseless act crushes us. He was kind and accomplished – president of his class, an eagle scout, National Honor Society, band, an intern at city hall, among many other things. Sam spent all of his free time raising awareness for the issues that meant the most to him. In his honor, we will do everything to make sure that there is #JusticeForSam," the statement began. "We are planning a vigil this week so that his friends and members of his communities can mourn, and we are working to offer a reward to help authorities find his killer. We will surely let you know through our family spokesperson our plans so you can help us get the message out and we get justice for Sam."

Philadelphia police responded to the 2200 block of North Park Avenue around 1:30 p.m. Sunday for a report of gunfire.

Responding officers found Collington suffering from two gunshot wounds to the chest. He was rushed to Temple University Hospital where he later died. 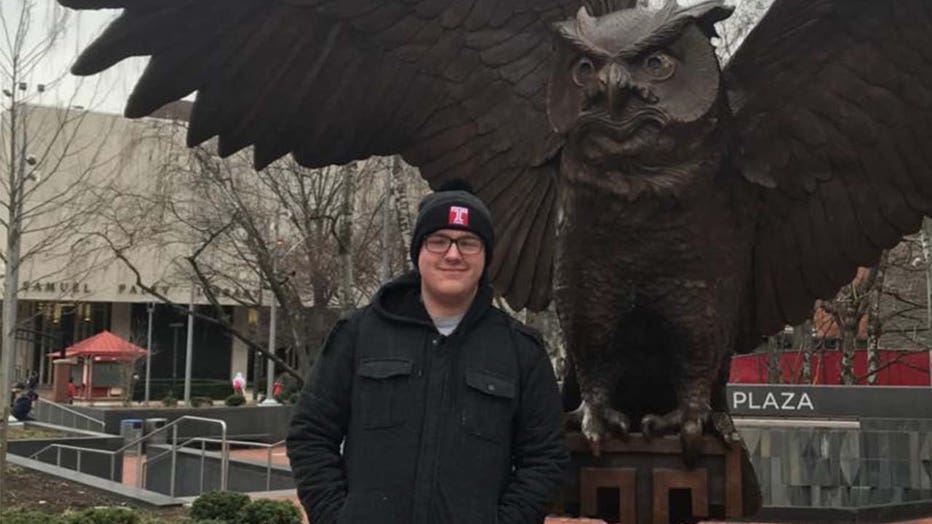 Samuel Collington, 21, was shot and killed during what police say was an attempted robbery on Sunday. He was set to graduate in the spring. (Photo provided by family)

Temple University later confirmed that the Delaware County native was a student at the school. He was on track to graduate from the College of Liberal Arts in the spring. Friends say he had plans to attend law school in the fall.

Investigators indicated Monday afternoon that they had recovered video of the attempted robbery and shooting that resulted in Collington’s death. According to the Philadelphia District Attorney’s Office, video shows Collington attempted to fight back against his attacker at some point during the incident, but they believe he had already been shot at that time.

The District Attorney’s Office says they’re hopeful that forensic evidence that was recovered from the scene will help lead them to a suspect.

"This is a tragedy in every sense of the word. Our thoughts are with the victim’s family, friends, and the entire Temple community during this tremendously difficult time," the university said in a statement on Sunday.

Samuel Collington, a 21-year-old Delaware County native, was gunned down during a robbery in North Philadelphia on Sunday. The school says he was set to graduate in the spring.

Temple also sent an email to students and parents informing them of the off-campus incident. The letter state that the incident ‘only further highlights the senseless gun violence that continues to grip the city of Philadelphia.’

A law enforcement source tells FOX 29, in November alone, there were at least three, possibly four carjacking-related crimes in the same area where Collington was murdered. That source says detectives are investigating the pattern and if it is connected to this tragedy.