Danielle Outlaw started work Monday amid a rise in homicides and calls for action to address ongoing allegations of racism and gender discrimination within the Philadelphia Police Department. FOX 29's Jeff Cole reports.

PHILADELPHIA - Philadelphia’s new police commissioner started work Monday amid a surge in homicides so far this year and calls for action to address ongoing allegations of racism and gender discrimination in the nation’s fourth-largest city police force.

Danielle Outlaw, the former police chief of Portland, Oregon, was chosen by Philadelphia Mayor Jim Kenney from a pool of more than 30 candidates to take the helm of the 6,500-officer force. Outlaw will be the first black woman to hold the position in Philadelphia.

Since Kenney announced her appointment at the end of December, Philadelphia has had a spate of homicides — 39 in fewer than 40 days. That follows the deadliest year for Philadelphia in more than a decade with 355 homicides reported last year. 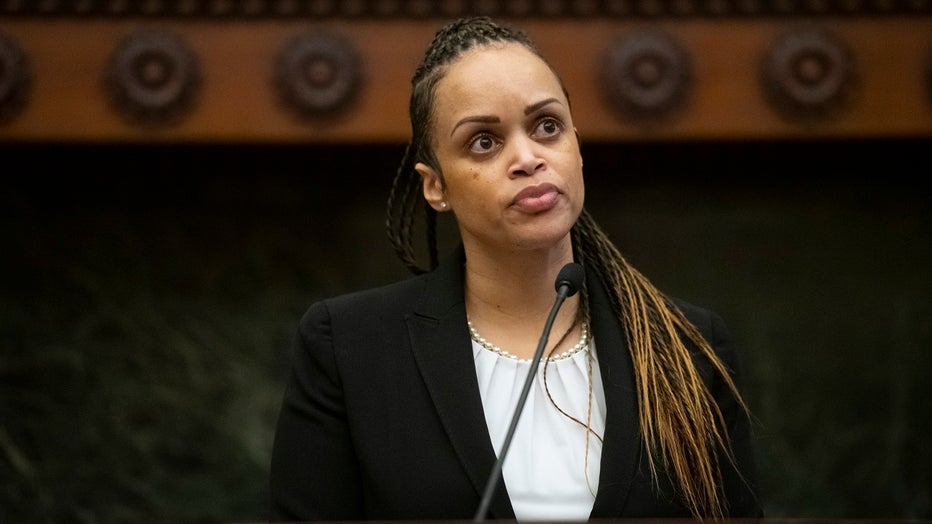 Danielle Outlaw addresses the media during a press conference announcing her as the new Philadelphia police commissioner. (Photo by Mark Makela/Getty Images)

Kenney said Friday that he expects that Outlaw will begin by becoming familiar with the culture of the city and listening to the concern of citizens and officers. He said he has high expectations that Outlaw will “usher in a new and better era for our city.”

“I appointed Commissioner Outlaw because she has the conviction, courage, and compassion needed to bring long-overdue reform to the Department,” he wrote in a statement. “With our support, she will tackle a host of difficult issues like racism and gender discrimination, while leading our administration’s top priority of reducing the gun violence that plagues our city.”

FOX 29's Steve Keeley has the story in Center City.

Outlaw did not respond to a request for comment through the city Friday, but she said at a press conference in December announcing her appointment that she brings a personal understanding to her role.

Lawsuit: No privacy, time for female Philadelphia police officers to pump at work

Prior to becoming the first black female chief in Portland about two years ago, Outlaw spent nearly 20 years with the police department in Oakland, California.

Former Philadelphia police commissioner Richard Ross Jr. abruptly resigned last summer after a lawsuit alleged that he ignored sexual harassment complaints because he’d once had an affair with one of the complaining officers. Ross denied that he’d retaliated against anyone.

Recent lawsuits have accused department brass of ignoring complaints that female officers were being sexually harassed by colleagues and supervisors and making it difficult for them to keep nursing when they return from maternity leave.

In October, a police inspector was charged with sexually assaulting three female officers he had mentored over the years. And, in July, the department pledged to fire more than a dozen officers as part of a national investigation of racist and violent posts made to police social media pages. Most of those officers had resigned or retried as of January.