Stretches of blocks destroyed in aftermath of Center City riots

philadelphia - What began as a peaceful protest with activists kneeling in front of City Hall to honor the life of the late George Floyd Saturday later turned into an eruption of tension that resulted in extensive rioting.

Inspiring chants and marches defined the sunny Saturday, but when night fell the positive approach was overtaken by looting, fires, injuries, and arrests marring the day.

Early Sunday, Philadelphians and volunteers from surrounding communities took to the streets of Center City in an effort to reclaim and clean the streets. 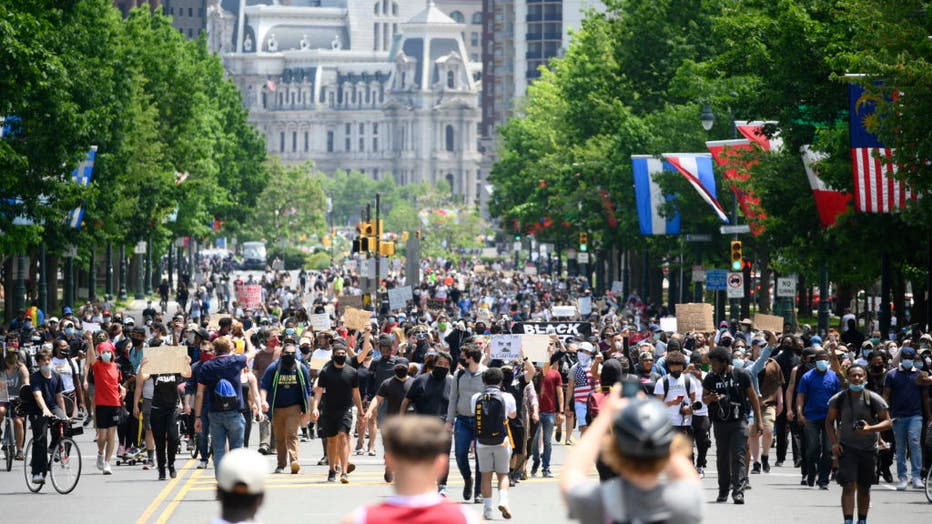 Hundreds march to protest Police Brutality at a rally in Center City Philadelphia, PA on May 30, 2020. Many cities in the nation see similar protest after the murder of George Floyd. (Photo by Bastiaan Slabbers/NurPhoto via Getty Images)

FOX 29's Steve Keeley explored the neighborhoods surrounding to report on the state of the city after a night of intense rioting.

From 15th and Walnut Street to 18th and Walnut Streets, Keeley and cameraman Michael Greenidge shared coverage of an endless sea of broken glass, looted merchandise, blaring alarms, charred remains of mannequins and other riot-related debris that lined the streets in the aftermath.

During Sunday morning's reporting, Keeley spoke with a variety of Philadelphians from incredibly diverse backgrounds with even more diverse perspectives about the devastation they were witnessing and their efforts to restore the community.

Steven Lagos, of Lagos Jewelry on Rittenhouse Square, was greeted by shattered windows and looting when he arrived at the storefront early Sunday.

The jewelry store has been a stronghold in the community for 22 years and Lagos expressed a sentiment of optimism in the aftermath of nationwide riots and outrage demanding justice for George Floyd.

"I don't know if just any where's safe right now. I think people are struggling with what's going on," Lagos remarked. "There's a lot of anger out there. Hopefully no one got hurt last night and that's really what's important. I hope we work through this."

Lagos only spoke with FOX 29 briefly, but his ability to keep a positive outlook even though his store was destroyed made a striking statement about the city's resilience.

From North Philadelphia to the 1500 block of Walnut Street in Center City, a volunteer named Tyler hit the streets with a brush, a dustpan, and a trash bag.

Initially, Tyler made the commute to capture footage of the damage left behind by the rioting and looting. Over the course of an hour, he noted that he saw approximately 30 storefronts that were completely demolished.

"This is completely ridiculous. This is my city," Tyler told FOX 29's Steve Keeley. "I definitely realize that there is a problem here, but I am definitely not here for the way this was handled. I think this is ridiculous and I want to get my city back to the way it was yesterday."

A native to Philadelphia, Tyler expressed that while he is not certain what the solution to ongoing civil issues would be, but he declared: "This is not the way to create change... This can't be it."

Tyler's actions spoke volumes as he worked to help the community in spite of his obvious frustration with the acts of others.

‘If not us then who’: Community cleans up in the wake of anti-police brutality riots in Philadelphia

Many of those who participated in Saturday's rioting and looting were adolescents and young adults, but they only represent a small, demonstrably angry portion of that demographic.

As Steve Keely learned early Sunday, there are many young adults that seek to effect change peacefully and constructively rather than destructively.

An unnamed young man, with an American flag patch proudly displayed on his jacket, spoke to FOX 29 as he cleaned up the streets in Center City.

"This is our city so when you come out and see this then if not us then who," the 24-year-old explained as his motivation to help fix a mess he didn't create.

The man further stated that while he cannot entirely relate with the explosive anger witnessed Saturday, he was able to sympathize with the pain.

"No one wants this. I don't know what it's like to live in a warzone, but this feels and looks a lot like one probably does," he said.

FOX 29's Steve Keeley reports on varying points of community responses to the aftermath of riots in Philadelphia.

Club Monaco, a boutique in Center City, was heavily looted and vandalized during Saturday's riots. Inside, the alarm continued to blare Sunday morning as community members worked to clean up.

Among those community members, a 23-year-old Drexel University student named Abe was equipped with his dorm's dustpan and broom to clean up the PNC Bank lobby. Of his own volition, and not wanting any recognition, he cleaned diligently to restore a semblance of peace to the bank.

From South Philadelphia, a group of very community-oriented Philadelphians arrived to join the clean-up efforts.

Anthony and Lisa Giordano are active in Stand Up South Philly, an organization that tackles problems to protect the City of Brotherly Love's best interests, and were furious over officials not acting to curtail the riots sooner.

"Stand Up South Philly is 100% against what happened in Minneapolis, Minnesota to Mr. Floyd. It was horrible what happened out there," Anthony stated. "I just can't understand what happened in our city when we knew it was coming and we didn't stop it."

And while he wouldn't disparage any members of the city government, he made it clear that the riots that happened Saturday were egregious.

"I just want to know why this did not stop and why this had to happen," Anthony reiterated. "We have the right to peacefully protest not to riot, not to burn the city down -- that's arson, not to loot."

In spite of their anger for what happened in Philadelphia during Saturday night, they expressed gratitude for towards the community for helping clean up.

Doing Better: Community rallies to clean-up after riots in Philadelphia

FOX 29's Steve Keeley talks with volunteers that hope to find a solution through action after Philadelphia riots.

There were many good and hard-working citizens out in Center City tirelessly spreading positivity during these very dark times.

As COVID-19 pandemic persists and health officials continue to advocate the use of personal protective equipment (PPE) and many of the citizens that Steve Keeley spoke with wore face masks and gloves to limit the spread of the coronavirus.

Among those health-minded individuals, a woman decided to honor her faith by doing a lot of hard work.

"Cleanliness is a strong part of my faith," the woman, who wore a hijab, told FOX 29. "And I believe strongly in our community building together."

It's clear that the City of Brotherly Love earned it's name even when struggles abound.

Late Saturday night, Mayor Jim Kenney mandated a curfew that will take place city-wide from 8 p.m., just prior to sunset, until 6 a.m. Monday.

The curfew only allows essential workers to go outdoors while the rest of the community must stay inside.

“The peaceful protests earlier were touching showings of our collective grief. The anger being displayed now cannot continue. Please have respect and dignity for each other and return home,” Kenney stated.

Fifteen police officers injured with one officer admitted to the hospital with a broken arm broken ribs after he was struck by an SUV.