Philadelphia officials speak out against vigilantes in Fishtown

PHILADELPHIA - Philadelphia residents were asking questions after a group of people armed with bats and other objects took to the streets Monday night in Fishtown.

And Mayor Jim Kenney provided his answer during a noon news conference Tuesday: "Going forward, any displays of vigilantism will not be tolerated, period," Kenney said.

Mayor Kennet condemned the actions of a group of residents armed with baseball bats in Fishtown Monday.

Tensions rose Monday as residents faced off with demonstrators near Frankford and Girard avenues.

SkyFOX and a FOX 29 crew were there as groups of people filled street corners near the 600 block of East Girard hours after a mandatory citywide curfew went into effect at 6 p.m. 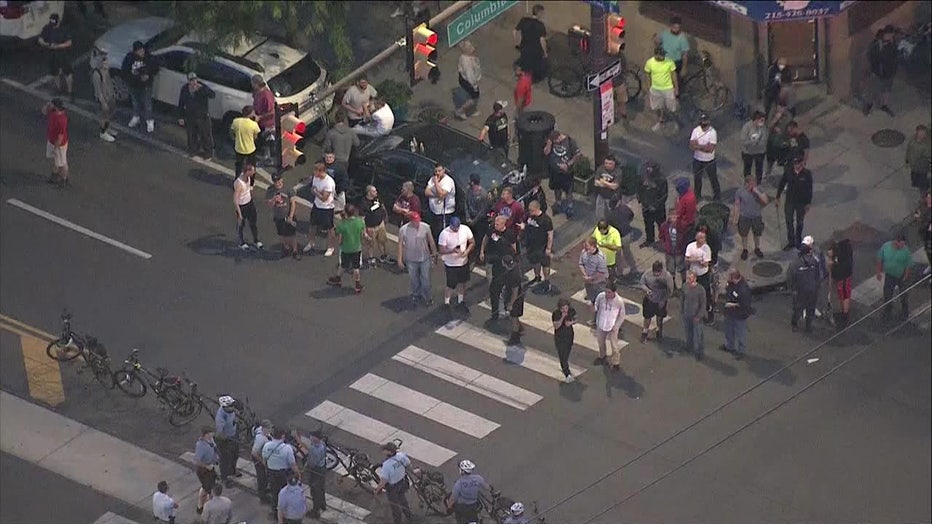 Members of one of the groups told us they gathered to protect their local 26th District police and neighborhood from the looting that has plagued the city since Saturday evening, when peaceful protests following the death of George Floyd first took a violent turn.

In other video, possibly from Port Richmond, people armed with guns can be seen from the ground standing on the rooftops of businesses.

Discussions and questions about the group and its motives flooded social media. Some demanded an explanation from police on why the group was allowed out past curfew, especially as they held weapons.

Police Commissioner Danielle Outlaw said officers stayed between the two groups to keep them apart, but sometime later the groups departed and "physically clashed" elsewhere, resulting in at least one assault.

That seems to be a different incident than one reported by a public broadcasting journalist, who was struck in the face and injured at the scene. FOX 29's Lauren Johnson reports the journalist was treated at a nearby hospital.

Kenney said Tuesday that acts like these aren't acceptable.

"Last night, a group of people in Fishtown took it upon themselves to make a show of protecting their neighborhood," he began. "They picked up baseball bats and, in turn, exemplified the deep divides in our community. Their actions were antagonistic and made a bad situation worse. We do not condone vigilantism. We understand a community's desire to protect their neighborhood, and if they want to do that in peace, we would allow it, regardless of neighborhood. But armed vigilantism will not be tolerated moving forward."

While glad police dispersed the Fishtown group, Kenney said, "I'm not happy about how long it took."

"We tolerated last night for too long, and that was a mistake," the mayor said. "We will not tolerate it moving forward."

He added that he was "disturbed" by reports that some of the officers were not only allowing the crowd to gather but were reportedly seen high-fiving and taking photos with them.

"That is unacceptable, and I know the (police) commissioner shares that view," Kenney said. "If you want to stand up for your neighborhood, if you want to help our police force, we welcome that – so long as you do so in a peaceful, non-threatening manner and non-confrontational way."

Outlaw had this to say on the matter: "To be clear, we do not condone any acts of violence, and as an agency we don't take sides. Our mission is to always protect all persons personally."

Outlaw says everyone has the right to defend themselves but the department does not condone 'any form of vigilante justice.'

Similar scenes have played out in other areas of the city, including South Philadelphia, where dozens of people gathered outside a Target store Sunday night, although they didn't seem to have weapons on display.

Also in South Philadelphia, a gun shop owner fatally shot one alleged looter and wounded another when they entered his business, authorities say.

On the general issue of private citizens protecting their property, the police commissioner had this to say: "While every person has the right to defend themselves and protect their property, we do not endorse or condone any form of vigilante justice, or taking the law into one's own hands. And we strongly encourage that, if there is a safe, non-violent way to protect one's self and property, that option should be selected."

Asked later why the armed people out past curfew weren't taken off the streets, Outlaw called it a good question and said she hoped to have an answer later in the day.

"I would not describe that group as someone that I would want speaking for me, or speaking on behalf of my police department," she said. "Again, I am not a proponent – we are not proponents of intimidation and fear for the purposes of being bullies. We had to bring the National Guard out here to fulfill an enforcement role."

Turning back to the topic of the neighborhood group, she said, "I don't welcome them to come back, and we don't need them."

“Reports and images of their innocent neighbors being beaten, threatened, and addressed with hateful speech by them are devastating. And, if confirmed, reports that some police officers witnessed and tolerated this conduct without arresting them only add to the hurt arising from George Floyd’s killing by police,” Philadelphia District Attorney Larry Krasner said in a statement Tuesday. “I know Commissioner Outlaw doesn’t want and will not tolerate passive support for vigilante violence and hatred from any Philadelphia Police Officer. The vast majority of people in Philadelphia’s streets right now are there because they are peacefully expressing the need for accountability in policing, which not only saves the lives of people like George Floyd but also restores trust between police and the people they serve, and elevates decent police officers by knocking down those who have gone rogue.”

"The sight of armed vigilantes in Philadelphia streets shames the entire city. By marching through Fishtown armed under the guise of protecting police — who are already armed themselves with guns, shields, helmets, and other weapons — from people who just want to be heard, those men further reinforced the idea that people cannot peacefully question authority without meeting violence."

Violence and threats and disorderly acts of hatred will not be tolerated by the Philadelphia District Attorney’s Office, according to Krasner.

Biden meets with black leaders at Delaware church amid unrest

Amid weekend unrest, 7 killed in shootings across Philadelphia

Krasner: Frank Rizzo statue 'should have never been erected' due to 'racist' history

Fire Commissioner: Crews 'taking great risk to protect these businesses and to save lives'