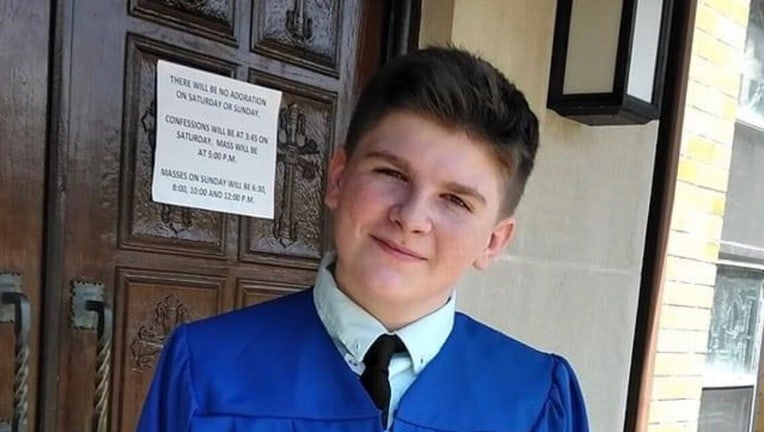 Sean Toomey, 15, died following a shooting outside of his home back in March. (Family Photo)

PHILADELPHIA - Two teens are facing murder charges in the shooting death of a Philadelphia boy who was killed while unloading groceries from his family's car in March.

The Philadelphia District Attorney's Office announced murder charges against Daniel Gardee and Saahir Teagle, both 17, in the killing of 15-year-old Sean Toomey.

Gardee turned himself in on Wednesday, according to the D.A.'s office. Teagle is in custody in Camden, New Jersey and will be transported back to Philadelphia.

Authorities say on March 24th Toomey went outside to get a case of water from his family's car on the 6200 block of Mulberry Street around 9 p.m. when he was shot.

Toomey was rushed to Jefferson-Torresdale Hospital where he died hours later.

Shortly before Toomey's murder, it's alleged that Gardee and Teagle participated in an attempted armed robbery of a woman at an ATM and a car theft.

The D.A.'s office says Gardee was arrested for battery and disturbing the peace in Miami Beach less than a week after Toomey's murder.

Both Gardee and Teagle were taken into custody at an AirBnB on the 1200 block of Newkirk Street in April where several firearms were allegedly found. Prosecutors say Teagle was charged with illegal firearm possession and his firearm was recovered by police.

Police have released photos of two suspects wanted in connection with the murder of Sean Toomey. The 15-year-old victim was retrieving a case water from his family's car when he was shot and killed in front of his Philadelphia home.

The District Attorney's Office says Gardee and Teagle were not identified as suspects in the murder of Toomey when they were previously arrested. It wasn't until a suspect in a June 9th carjacking told authorities that he and two others tried to rob a woman at an ATM in March, according to the D.A.'s office.

The carjacking suspect, who prosecutors say was not with the teens at the time of Toomey's murder, was also with Gardee and Teagle at the weapons-filled AirBnb. The breakthrough development helped the D.A.'s office approve charges less than a week later.

"Sean Toomey was a child full of promise and hope, like all children. The great potential he held was extinguished in a snap by strangers with firearms," Philadelphia District Attorney Larry Krasner said. "Sean Toomey should be alive today and looking forward to the rest of his life."

'Enough is enough': Community comes together to call for justice in killing of 15-year-old Sean Toomey

A rally was held Tuesday for 15-year-old Sean Toomey who police say was shot and killed outside his family's house in Wissinoming last month. Investigators believe Toomey was gunned down while walking to his father's car. No arrests have been reported.

He joined other families of Philadelphia gun violence victims in calling for Krasner's impeachment.

He said it was not Krasner’s job to act as a defense attorney and advocate for criminals — but his responsibility to prosecute them.

Krasner’s office responded to FOX 29's request for comment, saying, "We do not wish to dignify the exploitation of people who have lost loved ones to violent crime."