Symbols of hate on display amid U.S. Capitol riot

Shira Goodman, Regional Director of the Anti-Defamation League, discusses some of the symbols that were on display during the riot. It is FOX 29's policy not to show symbols of hate, but we have decided to do so during this segment for educational purposes.

PHILADELPHIA - One week after the deadly Capitol Riot, FOX 29 sought to explore some of the hidden meanings of hatred that were on display during the incident.

It is FOX 29's policy not to show symbols of hate, but we have decided to do so during this segment for educational purposes.

Of those symbols, those among the mob wore shirts or carried flags that displayed symbols of hatred. They were just as deeply disheartening to visibly see at the nation's Capitol.

A shirt with the words "Camp Auschwitz" was one of the visible symbols of hatred. Auschwitz was one of the many concentration camps where many died under Nazi Germany rule.

At the gates of Auschwitz, there was a sign that read "Work means freedom" -- an irony that made prisoners believe that freedom could be achieved by work when many were immediately sent to gas chambers.

Similar shirts with logos that read "6MWE" have been spotted at other events recently. "6MWE" is believed to stand for "6 million weren't enough" -- as though to mean that the 6 million Jewish lives lost during the Holocaust weren't enough.

At one point, the mob even fashioned a noose and hung it from a tree. The long and deep history of the disturbing nature of lynchings and mobs taking perceived "justice" into their own hands was also symbolic of hatred. 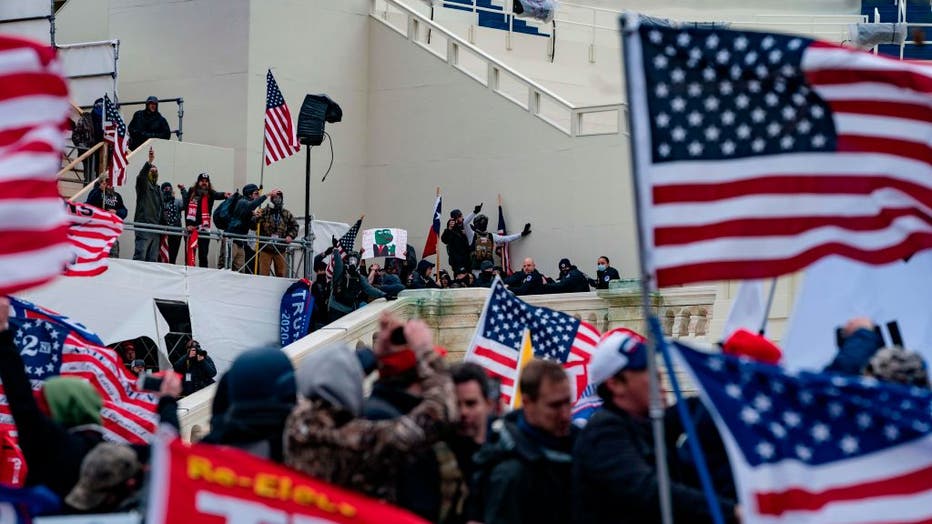 In a bid to lessen the hate, companies have begun targeting sites or their own platforms in order to purge hate symbols and language. Among them are Twitter, Amazon, and Facebook which have begun actively blocking language that depicts hate or promotes violence.

The ADL, which has been monitoring and tracking extremist groups, has noticed the language of these groups getting more and more violent.

However, Shira Goodman of the ADL advocates for acknowledging the hatred out there but also not letting it stop you from reaching out to your representatives.

"But if you need to talk to your representatives or senators, you should call them or email them. That is your right," she asserted.

She made clear that those full of hate don't want those fighting the good fight to keep working for good legislation.

After Capitol breach, House on verge of 2nd Trump impeachment