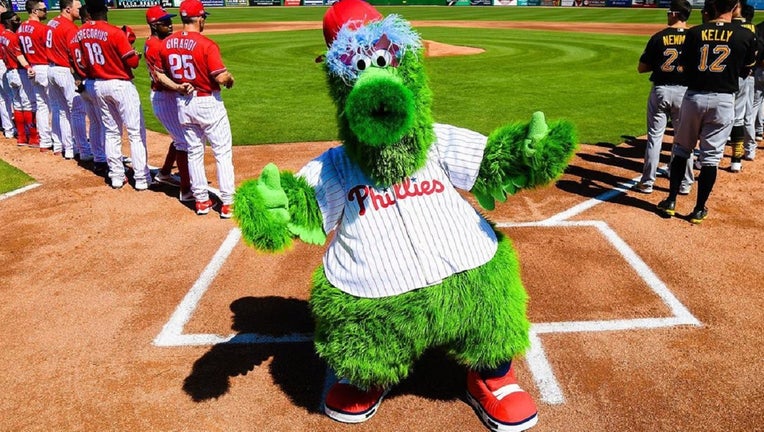 PHILADELPHIA - The creators of the original Phillie Phanatic accused the Philadelphia Phillies of "an affront to our intellectual property rights and to Phillies fans everywhere" with the team's redesign of the 42-year-old mascot.

The Phillies unveiled the redesign of the green mascot before Sunday's exhibition game against Pittsburgh in Clearwater, Florida. The new look features flightless feathers rather than fur-colored arms, stars outlining the eyes, a larger posterior and a powder blue tail, blue socks with red shoes, plus a set of scales under the arms.

“Over the last 40 years, the Phanatic has evolved,” Phillies executive vice president David Buck said Saturday. “He’s evolving a little bit more. The changes are creative. I think the fans will like them.”

Wayde Harrison and Bonnie Erickson issued a statement Tuesday accusing the Phillies of a “lack of good faith in negotiating for an extension of the copyright assignment.”

“The Phillies lack of good faith in negotiating for an extension of the copyright assignment for the Phillie Phanatic is disappointing,” Harrison said. “But the unveiling of the so-called ‘new’ Phanatic on Sunday is an affront to our intellectual property rights and to Phillies fans everywhere.”

“For more than 40 years, we have worked closely with the Phillies, making all the Phanatic costumes, providing artwork and ideas until June of 2018,” Erickson added.

“The Phanatic has performed successfully for the Phillies and the city of Philadelphia for decades. The ‘business decision’ by the Phillies to roll out this ‘new’ Phanatic is a transparent attempt to deny us our rights under of the Copyright Act," they said. "We would love to have the real Phanatic continue with the Phillies."

The team did not immediately respond to a request for comment.

The lawsuit is in its discovery phase.

The Phanatic’s copyright expires on June 15.  The Phillies are prepared to move forward with Sunday’s iteration of the Phanatic if a resolution is not reached by then.