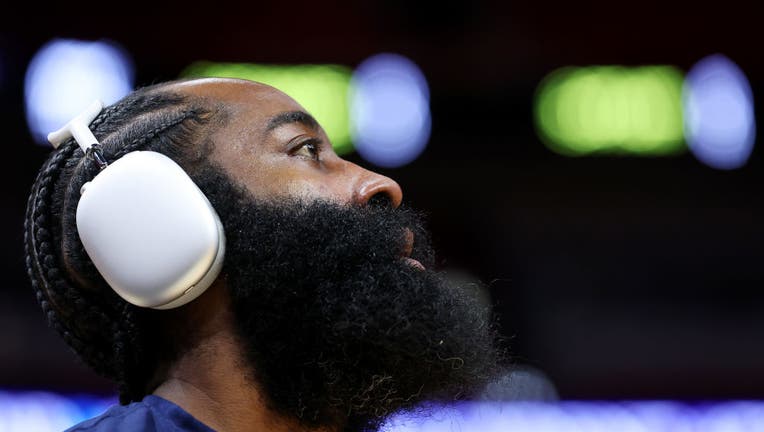 MIAMI, FLORIDA - MAY 10: James Harden #1 of the Philadelphia 76ers warms up prior to Game Five of the Eastern Conference Semifinals against the Miami Heat at FTX Arena on May 10, 2022 in Miami, Florida. (Photo by Michael Reaves/Getty Images)

LOS ANGELES - James Harden is vowing a return to his high-scoring form after battling a lingering hamstring injury that created rare doubt for the three-time NBA scoring champion over the last two seasons.

He expects similar big things from the Philadelphia 76ers after taking less salary in his contract this season to help the team improve and chase the championship he still seeks.

Harden injured the hamstring playing for the Brooklyn Nets in the 2020-21 season. The first serious injury of his 13-year career was "a wake-up call" that had Harden thinking about life outside of basketball.

Finally healthy again, he's spending the summer in his hometown of Los Angeles. Relaxing barefoot in a fully furnished, nine-bedroom, 14-bathroom rented mansion perched on a hillside above Beverly Hills with panoramic views stretching to downtown LA, Harden is eager to put the past behind.

"I’m looking to have an unbelievable season," he said Sunday. "I don’t want to just go out there and be running around and not being efficient and looking old out there. I still want to be really, really, really good."

Harden declined his $47.4 million player option with the 76ers for next season and instead agreed to a new two-year deal that will pay him $32 million in 2022-23. It includes a player option for the second season. The deal isn’t yet finalized and Harden didn’t address the negotiations.

However, the 10-time All-Star confirmed to The Associated Press that he made the decision to allow the 76ers the flexibility they needed to go after other players. If he hadn’t declined the option, the team would have been hard-pressed to bolster its roster led by NBA scoring champion Joel Embiid.

"Taking less money this year to sign as many players as we needed to help us contend and be the last team standing was very, very important to me," Harden said. "I wanted to show the organization, the Sixers fans and everybody else who supports what we’re trying to accomplish, what I’m trying to accomplish individually, that this is what I’m about."

"We got some really good pieces this summer, so now it’s time for us to go do the hard work," Harden said.

Harden averaged 22 points this season for Brooklyn and Philadelphia, lowest since he became a starter in the 2012-13 season. He turns 33 in August.

"For any other players, that’s a max contract," he said of his lower numbers, "but it’s like, for me, I was not the same James Harden."

He relied more on 3-pointers and free throws than driving to the basket. His usual speed was replaced by sluggishness and his mind was preoccupied with the injury.

"I wasn’t able to get in my spots and get to where I needed to get to without thinking about it, so that right there slowed my confidence down," he said. "It was craziness, but I’m finally back. I’ll be a lot more aggressive scoring-wise just because my body allows me to."

"Coming back and being the aggressor, the scorer first and then the playmaker, is something that I need for myself," he said.

Sitting in front of an unlit fireplace with the mansion's air conditioning on the fritz, Harden raps his knuckles on a wooden table.

"It feels like I had a perfect career," he said. "I didn't have any serious injuries, but that (hamstring) right there slowed me down to where all right, you got to start thinking about other things than basketball."

Harden already owns restaurants, gyms and has a stake in a tequila company among his varied business interests. With a curiosity for just about everything, he got into wine a few years ago.

Harden spoke to the AP to discuss his upcoming J. Harden x J Shed wine collaboration that debuts in September. The label features bold colors and his likeness in sunglasses and his trademark beard. Prices range from $14 to $18 a bottle.

"We came to disrupt the wine business, that was our mindset," he said. "I don't feel like any other wine is doing that."