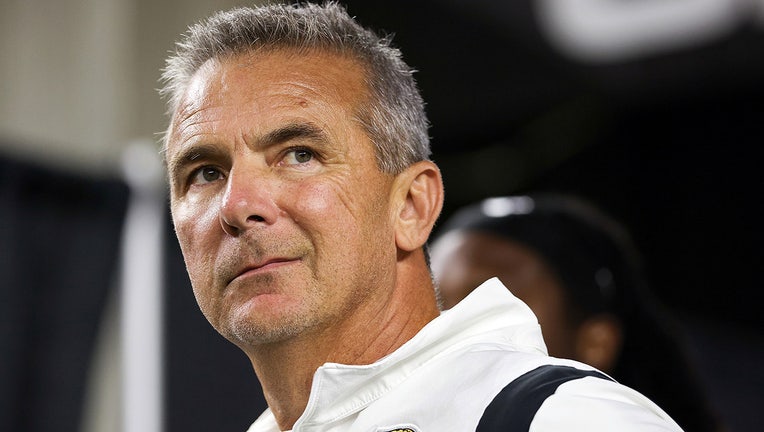 Head coach Urban Meyer of the Jacksonville Jaguars looks on before a game against the Cincinnati Bengals on September 30, 2021 in Cincinnati, Ohio. (Photo by Dylan Buell/Getty Images)

JACKSONVILLE, Fla. - Jacksonville Jaguars coach Urban Meyer apologized to his family, his team and owner Shad Khan for "being a distraction" after a video surfaced over the weekend showing a young woman dancing close to his lap.

Meyer called a team meeting Monday and vowed to "own it," the motto he uses daily and has plastered all around the Jaguars facility.

"I just apologized to the team and staff for being a distraction," Meyer said. "Just stupid and so I explained everything that happened and owned it. Just stupid. Should not have myself in that kind of position."

Meyer didn’t fly back with his team following Jacksonville’s 24-21 loss at Cincinnati on Thursday night. He remained in Ohio to see family members and went to dinner Friday at his restaurant/bar in Columbus, Urban Meyer’s Pint House.

"I stayed to see the grandkids and we all went to the dinner that night," he said. "There was a big group next our restaurant and they wanted me to come over and take pictures, and I did. They were trying to pull me out on the dance floor, screwing around, and I should have left."

The 9-second video of Meyer and the woman went viral Saturday night.

"I’ve always been so defensive of (my players)," he said. "I remember when (rookie quarterback) Trevor (Lawrence) told me he was going to go to Vegas for his bachelor party. I was just like, ’My gosh, man, be careful and surround yourself because I’ve seen this happen.′

"The team, I spoke to a bunch of leaders one on one, spoke to all the players. They’re good. They’re focused on Tennessee. I apologized again for being a distraction. A coach should not be a distraction."

Meyer said he also apologized to his family.