PHILADELPHIA - The National Weather Service confirmed seven tornadoes touched down in Pennsylvania and New Jersey during the peak of the storms Wednesday.

NWS crews headed out to Mullica Hill, New Jersey where a confirmed tornado ripped through a number of homes and caused other destruction. The storm survey team has completed a preliminary report on the tornado. The preliminary rating was an EF-3 with estimated maximum winds of 150 mph. 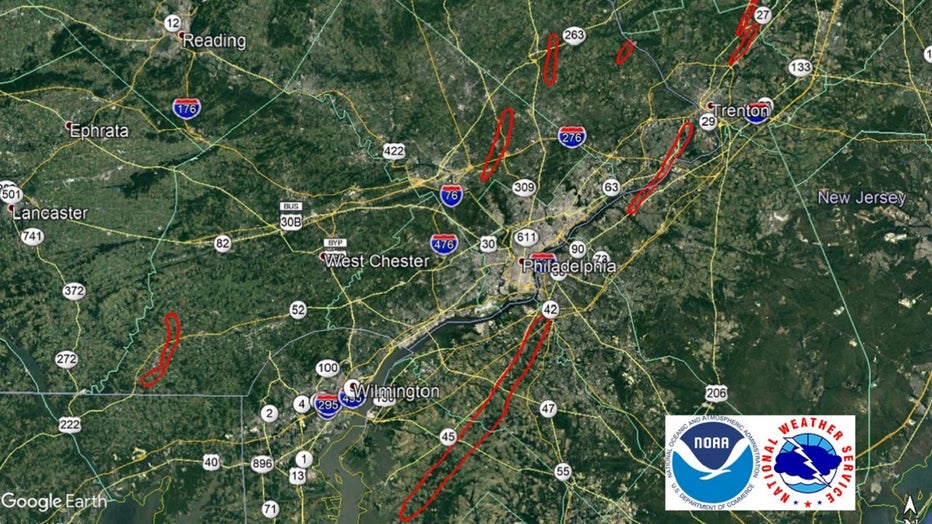 Further north, crews surveyed damage in Burlington County where there were reports of a tornado on the ground near the Burlington Bristol bridge Wednesday afternoon. According to the National Weather Service, the tornado that touched down in Edgewater Park traveled to Bristol, Bucks County.  A tornado was also confirmed in Princeton, Mercer County.

Governor Phil Murphy requested major disaster declaration from President Biden to aid the Garden State in the wake of the destruction.

In Pennsylvania, the weather service says an EF-2 tornado with estimated peak winds up to 130 mph touched down in Fort Washington, Upper Dublin Township on Wednesday. The tornado traveled from Upper Dublin to Horsham Township.  A tornado also was confirmed in Oxford, Chester County.

Remnants of Hurricane Ida swept through the area late Wednesday afternoon, bringing heavy rain to the area and triggering a number of tornado warnings into the evening.

Videos sent to FOX 29 show a tornado on the ground in Mullica Hill, New Jersey. FOX 29's Jennifer Joyce reports several homes were destroyed in one neighborhood and minor injures were reported.

Clean-up is already underway in areas like Mullica Hill, where countless videos of a tornado moving through the area surfaced on social media.

FOX 29 crews made their way to one Mullica Hill neighborhood Wednesday and Thursday morning where residents who had their homes severely damaged in the storm were left to pick up their belongings.

The rain also caused swelling of rivers and creeks across the area, including the Schuylkill, Delaware, and Brandywine rivers. The flooding prompted road closures across the area and left some people stranded inside their cars, homes, and businesses.

According to an advisory, there have been several people rescued from cars that became overwhelmed with floodwater from the Schuylkill River. Philadelphia is advising people in flood zones to shelter in place until floodwaters recede.