Neighbors tell FOX 29's Jeff Cole a woman was on the second floor of her home when she was struck and killed by a tree that came crashing through the roof as powerful storms moved through the area.

NORRISTOWN, Pa. - Officials say they are investigating at least four storm-related deaths Thursday after remnants of Ida brought powerful storms, flooding, and a number of tornadoes to the area Wednesday.

FOX 29’s Jeff Cole reports one of the fatalities occurred in an Upper Dublin neighborhood where dozens of trees had been knocked down during the storm.

Neighbors say one of those trees fell through the roof of a home, fatally striking a woman on the second floor of her home. According to neighbors, the woman’s husband was attempting to reach her to bring her downstairs when the tree came down. 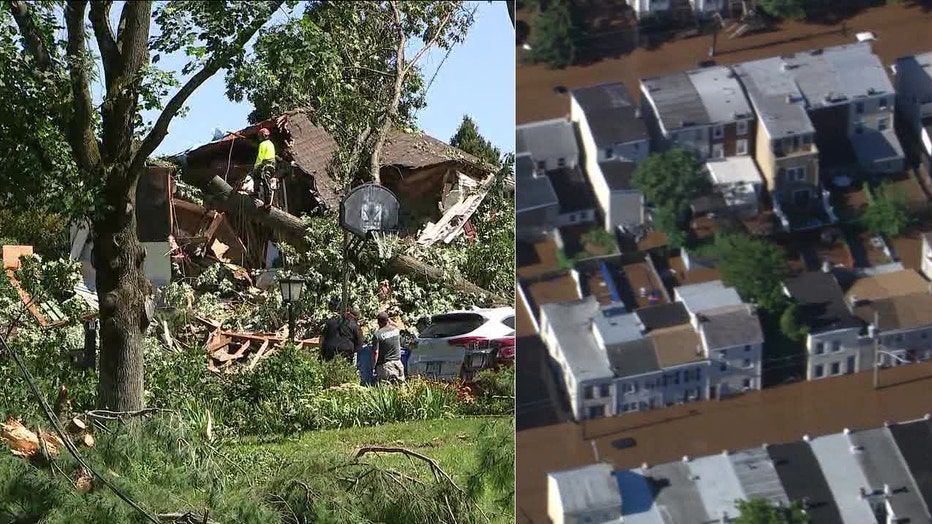 Officials have not released details about any of the victims, or the circumstances of the other three deaths.

Different parts of Montgomery County woke up to different problems Thursday morning. Tornado Warnings issued by the National Weather Service said confirmed "large and extremely dangerous" tornadoes were located over Willow Grove, while Norristown and Bridgeport were among the areas dealing with flooding.

Rescue crews used a dinghy to rescue people from a flooded home Thursday morning in Bridgeport, Montgomery County. Intense rain and damaging storms from the remnants of Hurricane Ida cause the Schuylkill River to pour over into communities in Philadelphia and its suburbs.

The ferocious storm also spawned tornadoes, including the one in Willow Grove, and one that ripped apart homes and toppled silos in Mullica Hill, New Jersey.

Major flooding along the Schuylkill River in Pennsylvania swamped highways, submerged cars and disrupted rail service in the Philadelphia area. In a tweet, city officials predicted "historic flooding" on Thursday as river levels continue to rise. The riverside community of Manayunk remained largely under water.

The rain in the tri-state area ended by daybreak Thursday as rescuers searched for more stranded people and braced for potentially finding more bodies.