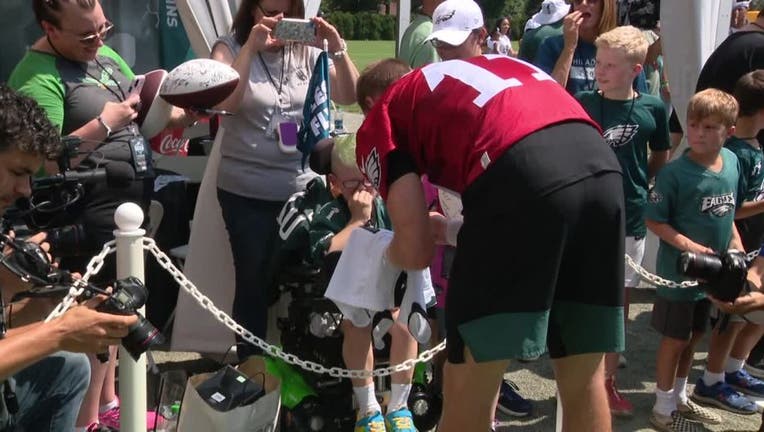 Carson Wentz and Giovanni shared a special moment on the training camp sidelines back in 2019.

PHILADELPHIA - Former Philadelphia Eagles quarterback Carson Wentz may be on his way out of Philadelphia, but he's still working to leave a lasting impact on the city and fans.

On Wednesday, Carson and his family surprised one of his biggest fans, Giovanni Hamilton, on a Zoom call with his Audience of One Foundation.

Giovanni shared video of the surprise on social media, saying he had "no idea" Wentz was going to pop up on the Zoom call.

Over the years, Giovanni and Wentz have shared a few viral moments, with the first coming during training camp in 2019, when the two shared a special moment as Wentz walked off the field.

The quarterback stopped to greet Giovanni who was waiting on the sideline. Wentz greeted the Williamsport, Pennsylvania native with a hug and recalled meeting him at practice in previous years, and asked how he had been doing.

Giovanni, who continues to battle a rare genetic disorder, began tearing up and uttered, "You're my hero."

Two seasons later, with the news that Wentz would be moving on to the Indianapolis Colts, Giovanni says his feelings about Wentz haven't changed.

"You're still my hero," Giovanni said in the video he posted Thursday. "You always will be."

"That moment is what matters," he added as he pointed to a photo of their previous encounter.

After sharing the video of Wentz and his family surprising him on Tuesday, Giovanni revealed that Wentz offered to bring him out to Indianapolis for a game.

Giovanni added that there was more to the video than what he shared, but said since the video is so special to him he'll be keeping the rest to himself.

Following the trade, Wentz's Audience of One Foundation shared the results of their charitable efforts in the Delaware Valley since forming in 2017. They also assured that they would be continuing to serve the people of the Delaware Valley

You can watch Giovanni's video here, or follow his podcast here.