FOX 29's Marcus Espinoza has more as hundreds hit the streets on Saturday to protest the officer involved shooting of Walter Wallace Jr.

The protest began around noon near the intersection of 61st and Locust Streets, then migrated to the 18th district police station where armor-clad officers stood guard behind police barricades.

The protest ballooned in size as the afternoon continued. An estimated 400-500 people gathered at Malcolm X Park on Pine and 52nd Streets. 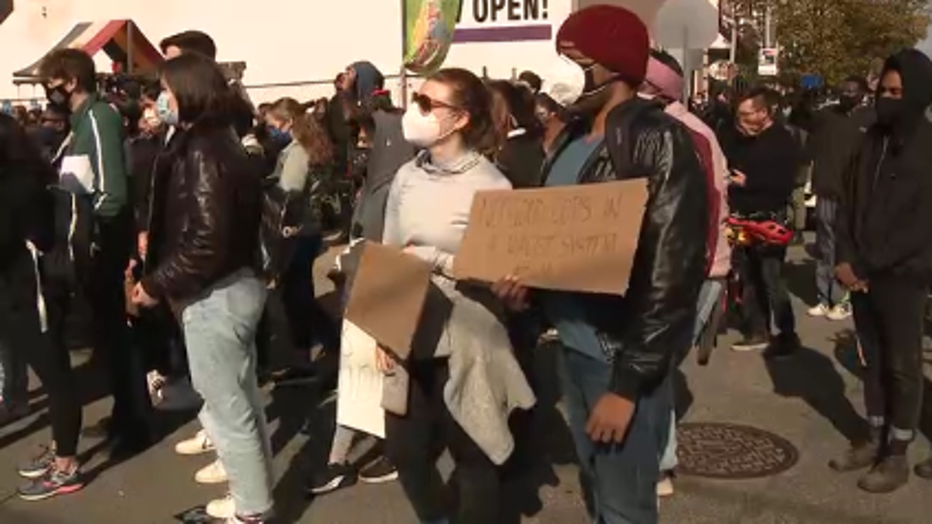 The protests have remained peaceful to this point. Philadelphia police added support over the recent days from state and federal authorities following violent riots and looting earlier this week. Hordes of state police troopers arrived in Philadelphia on Thursday night and were followed by truckfuls of National Guard service members on Friday morning.

Demonstrations began Monday night after two Philadelphia police officers fatally shot Walter Wallace Jr. on the 6100 block of Locust Street. Police say Wallace Jr. was holding with a knife when officers arrived and was instructed several times to drop the weapon before he was shot. Wallace's family argues their 27-year-old son was having a mental health crisis and required medical attention instead of police intervention. City officials announced Friday that body camera footage and 911 audio will be released next week.

Body camera footage of Wallace Jr. shooting to be released on Wednesday

FOX 29's Jeff Cole has more on the decision to release police body camera footage of the shooting death of Walter Wallace Jr.

Protests soon turned violent in the wake of Wallace's death as dozens of officers were injured and police cars were set on fire on Monday night. Among the injured, a female police officer suffered a broken leg when she was run over by a truck.

Looting and rioting became more prevalent during the second night of unrest as businesses in Port Richmond were ransacked and destroyed. Philadelphia police on Thursday said 212 people have been arrested during the widespread unrest across the city, including 40 arrests for burglary on Wednesday alone. The violence caused Philadelphia leaders to enact a curfew overnight Wednesday and Friday.