Investigators believe at least two shooters got out of a dark-colored SUV and fired shots down North Broad Street in Hunting Park late Tuesday night.

PHILADELPHIA - Police say one man was injured and over two dozen shots were fired during a shootout that erupted near a crowded club late Tuesday night in Hunting Park.

Philadelphia Police Chief Inspector Scott Small told reporters the shooting happened just before midnight on the 4200 block of Broad Street and stretched down to the 1300 block of West Jerome Street.

Investigators believe at least two shooters got out of a dark-colored SUV and fired shots down North Broad Street. Based on shell casings found at the scene, Small said someone returned fire towards the shooters and hit a crowded club door with gunfire.

According to police a 37-year-old man was hit twice in the leg and ran inside a Walgreens near the intersection of Broad Street and Hunting Park Avenue. Officers drove the man to Temple Hospital where police say he is expected to survive. 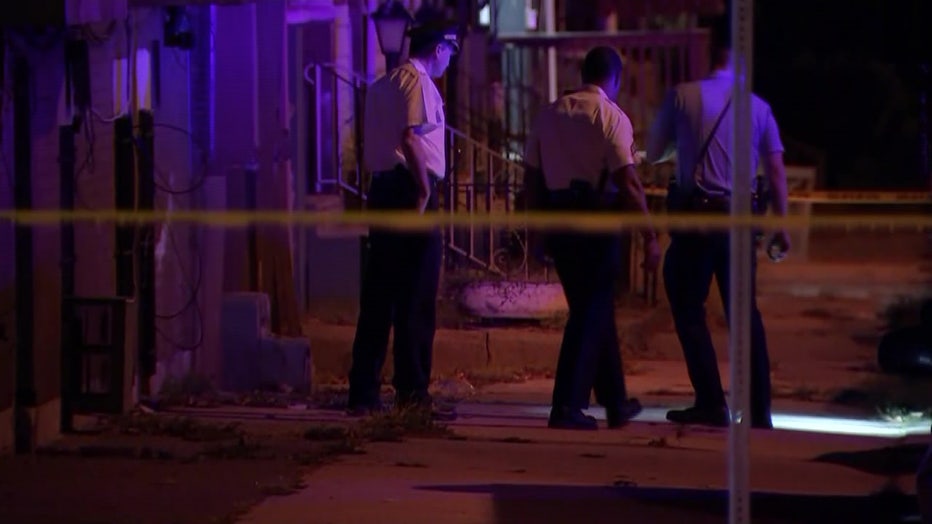 Police say over 20 shots were fired in a shootout late Tuesday night that injured a 37-year-old man.

Small said at least four parked cars were hit by gunfire during the shooting and at least one bullet ripped through the front door of a crowded club, but no additional injuries were reported.

Of the at least 26 spent shell casings found at the scene, Small said several were large rifle rounds.

Albert Finney, a towering former Marine, heard the gunplay overnight while in his kitchen.  He looked out to see people running and police quickly on the scene.

"I think it’s ridiculous arguments are being settled with gunfire instead of conversation. A lot of innocent people are caught up in the melee. Me being one of them," said Finney, as he looked at the bullet strike on the hood of his gray truck.

A few doors away, Pamela Jackson, a resident of North Broad for eleven years, said she was watching television in bed with her husband when she heard the shots. Jackson told FOX 29 she thought the shooting was just outside her window.

No arrests were reported immediately following the shooting. Police believe a rifle was used but did not provide a description of the suspected shooters.

"Overall, yes shooting and homicides are still up. We still have a lot of work left to do. We must continue to chip away at the violent crime that’s touching every single one of our communities," Outlaw said.