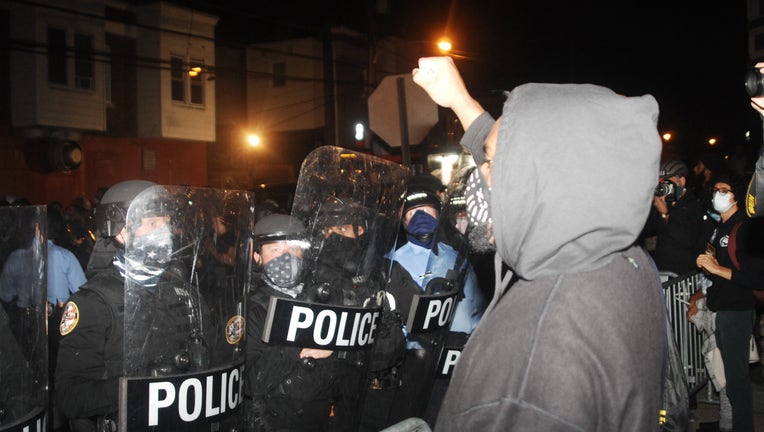 Protesters confront police outside of the 18th Police Precinct at 55th street and Pine Street in West Philadelphia, PA on October 27, 2020.Protests continue in West Philadelphia as residents and family members mourn the killing of Walter Wallace Jr.

PHILADELPHIA - In response to consecutive nights of looting and unrest following the officer-involved shooting death of Walter Wallace Jr. Philadelphia has issued a citywide curfew beginning at 9 p.m. Wednesday through 6 a.m. Thursday.

During this time grocery stores, restaurants and pharmacies are only allowed to open for deliveries. If businesses choose to remain open in this capacity, the city said buildings should be secure to protect on-site and delivery employees.

Peaceful demonstrations soon spiraled into riots and looting in areas across Philadelphia. Over 30 police officers were injured Monday night after being pelted with rocks and bricks. Police cars and dumpsters were set on fire as officers struggled to gain control of the unruly crowds.

FOX 29's Steve Keeley has more from a Port Richmond Walmart that was hit hard by looters Tuesday night.

Among the injured was a female officer who suffered a broken leg when a large pickup truck ran into her. The suspected driver of the truck has since been caught, according to sources.

Rioting and looting became more widespread overnight Tuesday. In Port Richmond, rioters destroyed a Walmart and fled the store with merchandise and electronics. In the same shopping center, rioters devastated a Five Below and a privately-owned furniture store and nail salon. More than a half dozen ATM were reportedly exploded across the city.

On Tuesday, Walter Wallace Sr. condemned the looting and destruction while calling for justice for his son.

“I ain’t got time to loot, burn up, and destroy where I live. It's uncalled for, it really, really is and the people doing it ain't helping my family. They are showing disrespect," Walter Wallace Sr. said.